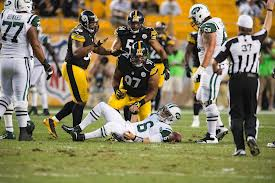 Heyward will have zero impact on Watt, Fitzpatrick getting monster deals

The Pittsburgh Steelers signing defensive end Cam Heyward to a massive five year, $75.1 million extension that includes $65.6 million in new money came down to the Steelers at the end of the day deciding that on and off the field Heyward was just irreplaceable.

The deal from a yearly average standpoint is the highest for a defensive player over 30 in NFL history. Again, this was a massive deal for the Steelers to make.

The Heyward Deal was proof again that the Steelers will always step up to the plate and pay market value to keep their stars long-term when both parties actually want to make a deal. The exception being Le’Veon Bell who the Steelers internally believe was never going to sign a long-term deal.

There’s certainly risk in dishing out this type of deal to a 31 year old defensive lineman entering his 10th season and what it means to others in line for big deals remain to be seen.

One thing to keep in mind, though.

For about the last 10 years, every season and off-season we hear ‘Steelers in salary cap hell’ and so on. It’s going to be nauseating this season. What so many overlook is in the NFL there’s always a way to keep your own stars and the Steelers in 2021 will find a way to move enough money around.

The Heyward deal will have zero impact on T.J. Watt and Minkah Fitzpatrick getting monster deals in 21 and 22.

Someone like Bud Dupree is a different story where the Heyward deal will have a limitation on what the Steelers will be willing and able to do with Dupree next off season were the arrow continue to point up for Dupree who will play this season on the franchise tag.

— Love the Steelers final roster tweaks, starting with the signing of Safety Sean Davis. There’s one true weakness on this defensive unit and it’s Terrell Edmunds. In a year where familiarity is going to be critical, Davis fits the bill perfectly to provide needed depth and a potential option to supplant Edmunds in some packages.

— Did the Steelers do enough to upgrade to the backup quarterback position? Of course not, they missed a great opportunity to bring in a legitimate No. 2 on the cheap in free agency. Putting all their eggs in Mason Rudolph’s basket is problematic if Ben Roethlisberger can’t get through the season. However, bringing Josh Dobbs back as the No. 3 QB was another shrewd depth move in bringing in a QB with familiarity who can add a mobility element were the Steelers have Big Ben go down again.

“Excited to bring Josh back in the fold,”[hide] Tomlin said. “Prudent use of mobility an asset of him. One of the reasons we’re excited in reacquire him.”
[/hide]

Do or die for Vegas.

That team died the minute they hired that clown coach

What, did he go home for the offseason?

We didn’t address the running game at all which was 30th overall……With teams like Kansas City we need to control the ball and you do that with a solid running game and we don’t have that.. We have young receivers, we have JU ju coming off a horrible year (banging Penn state junior and senior girls)

We have a 38 year old quarterback who is coming off injury who isn’t a given and isn’t Tom Brady.. and a crap head coach

The Pittsburgh Penguins traded forward Nick Bjugstad to the Minnesota Wild in exchange for a conditional draft pick pick in 2021, the team announced Friday.

The Pens are retaining a portion of Bjugstad’s salary as a part of the deal.

Pens believed to be retaining 50% of Bjugstad’s salary. I wish it could have been less but Im glad hes off the team.

Easier said then done with Hornqvist with the flat cap. No one will take his salary and with good reason. 3 more yrs at $5.30 million with a NTC.

McCann and Simon are both RFA’s.

Johnson’s contract is just a nightmare. Only a buy out (which is not going to happen) or a season ending injury, which I don’t wish on anyone, is the only way they will get rid of him. I don’t see teams taking on shit contracts to get to the cap floor next year.

Do you know how much salary we are retaining?

Lehner gets the extension in Vegas… Sams guy has been officially replaced… again! Good luck moving that 7 million

What did Lehner get?

The reported deal was 5 years $5 million per…..

Deal is in place but will not be signed until end of the playoffs.

Despite his salary fleury will have more teams after him then fraud murray even tho he is cheaper.

Imagine fleury and fraud murray both end up with seattle

Price is going to Seattle.

Why would Seattle want a 7 million dollar back up?

Hahahahaha haha… yes Sam…. the guy making 7 million a season and replaced for the second time in 3 years is gonna be more desirable than the 20 something hahahahahahahahaha

Hey assholeee flower is end of his career meanwhile your murray hasn’t hit puberty yet and is going to be replaced by his back up soon.

The Steelers, – We have a top 5 defense that is terrific. – We have a good offensive line. – We have some talented but unproven wide receivers – We have no back up quarterback..uugghhhhh – We have a 38 year old quarterback who i coming off a major surgery and isn’t a given ! – We had the 30th best running attack in the NFL and we pass on Ohio State All American running back J.k. Dobbs.. He falls in our laps at the draft and we pass for a wide receiver. Dobbs then goes to the hated Ravens… Read more »

JK Dobbs is such a huge talent thag you clearly watched play alot that you didnt realize his name is JK Dobbins.

Also, Claypool will be a much better pro. Superstar potential.

Sorry Dobbins my bad and he is a great talent…that’s all you have to say nothing of substance as usual… Must have had that loser the Steelers reacquired quarterback Josh Dobbs….

Sam you useless bag of dirt…Claypool is a wide receiver which we have plenty of..we had the 3oth ranked rushing attack in the NFL we needed a running back and we passed on 2 really good ones.. HELLO

That’s what they were saying about Edwards Helliare of the Chiefs oh he isn’t that good he had a 130 yards rushing last night. Dobbins is better..

id love to know who this “veteran back up QB” is and what he would consider cheap?

Must be Michael Vick lol