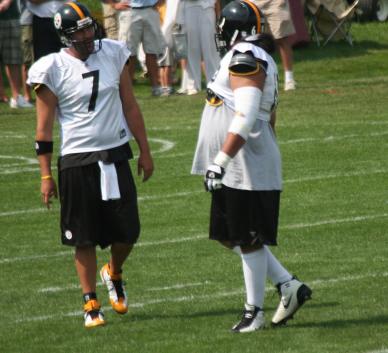 OTA No. 9: Tuesday Practice Report
Photo: David Hague – Inside Pittsburgh Sports
–Ben Roethlisberger showed up at Steeler team activities on the Southside today. His ban on practicing with the team was lifted by NFL commissioner Roger Goodell late last week.
-Roethlisberger ran with the first team. Byron Leftwich was not at the facility today. He (?coincidentally?) had the day off.
–Dennis Dixon ran with the second team and Charlie Batch piloted the third.
-Big Ben looked rusty at times but also had some good moments, such as hitting Arnaz Battle on a deep ball down the sideline.
–Antwaan Randle El admitted that he is still waiting for a deep ball from Roethlisberger to truly gauge if his arm strength is the same as it was when Randle El left for Washington after the 2005 Super Bowl.
-Roethlisberger didn’t speak to the media after practice. Neither did Coach Mike Tomlin who left practice early for a “conflicting engagement.” No assistant coaches were allowed to comment either. Roethlisberger may speak to reporters tomorrow or Thursday.
–Keenan Lewis and Antonio Brown had an above average practice fight with a number of punches thrown. Neither removed their helmets. Coaches demanded a break up of the fight and other players intervened. Neither were injured.
–Emmanuel Sanders dropped a wide open bomb from Dennis Dixon. He rolled around on the ground seemingly in pain. Or perhaps he was “pulling a Limas” out of embarrassment over a drop . That’s when receivers coach Scottie Montgomery demanded he get up and return to the huddle.
-The 1st and 2nd team offensive line rotation has been working like this:
Center Justin Hartwig continues to sit out of team drills. Doug Legursky is running first team center. The rest of last year’s starting unit remains the same with Trai Essex and Chris Kemoeatu at guard. Max Starks and Willie Colon are the tackles.
Kraig Urbik was at center on the second team today, flanked by first round pick Maurkice Pouncey and Ramon Foster at guard. The tackles were Tony Hills on the right side and Jonathan Scott on the left.
–Jonathan Dwyer received loud hoots and praises from coaches again for a second straight practice.
-The O-T-A sessions are supposed to largely be non-contact. But Lawrence Timmons and Rashard Mendenhall had a major collision they couldn’t avoid. Neither player was hurt. But Mendenhall’s helmet shot into the air.
–Hines Ward continues to be sidelined with a hamstring injury
-Troy Polamalu, James Harrison, and Ike Taylor joined Byron Leftwich as absentees.