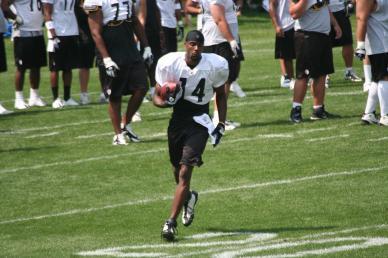 By Dale Grdnic
PITTSBURGH — As NFL second-round draft picks go, Limas Sweed has been a monumental bust during his brief Pittsburgh Steelers career.
Sweed, the Steelers’ No. 2 pick behind Rashard Mendenhall two years ago, tallied six catches for 64 yards and no touchdowns as an NFL rookie in 2008 and just one last season for less than 10 yards before being put on the inactive, but non-injured list.
Sweed released a statement Monday, as the Steelers began their spring organized team activities (OTAs) and he attempts to resurrect his career.
“I am excited to be back on the field and back in the locker room with my teammates,” Sweed said. “I appreciate all the support I received from the Steelers organization while I dealt with some personal issues at the end of the 2009 season.
“I have been working diligently, and I am focused on the remainder of the offseason in getting myself prepared to have a great 2010 season.”
Sweed was not available for comment other than the released statement.
Sepulveda Signs
Steelers punter Daniel Sepulveda signed his one-year contract tender Monday.
Sepulveda will enter his fourth year with the Steelers after originally being drafted in the fourth round (112th overall) of the 2007 NFL Draft out of Baylor. He has 140 career punts for 5,954 yards for an average of 42.5 yards per punt. His longest career punt is 60 yards, which he set in 2009.
Sepulveda had 72 punts for 3,074 yards in 2009 for an average of 42.7 yards per punt. He had at least one 50-yard punt in 11 games last season, and his 60-yard punt against the Cleveland Browns (Week 13) was the longest of his career.
Big Snack Not As Big
Steelers nose tackle Casey Hampton, who has seen his weight reach some 350 pounds during a season, came to spring OTAs much leaner this year.
Hampton was re-signed in the offseason to keep the Steelers’ defensive line intact. And Hampton’s dedication impressed his linemate, end Aaron Smith.
“It’s good that we had nearly everyone in here for the first day, working together to get a feel for each other,” Smith said. “That’s the best way to build a team and build that camaraderie. … I’m happy with the guys we signed and who we brought back.
“And Casey Hampton, I told him he looks great. Don’t you think so? I thought this was the best that he’s looked at this time at any point in his career. I’ve known Casey from the beginning and have seen him in all shapes and forms. And he just looks great.”
That didn’t help Hampton pick up the pace, though, as he ambled over to an individual drill from the middle of the field and team work so slowly that several defensive players had hit the blocking sled before he was ready to join in.
Quick Slants
The Steelers veteran free-agent signings got the following numbered jerseys: Arnaz Battle (81), Will Allen (26), Antwaan Randle El (82), Jonathan Scott (72) and Larry Foote (50). Randle El and Foote got their old numbers back, while Allen got unsigned free agent Deshea Townsend’s old number.
Safety Ryan Mundy and wideout Hines Ward were the only Steelers who didn’t practice. Mundy is still rehabilitating after offseason shoulder surgery, and Ward did not attend the opening workout due to an excused absence.
Saftey Troy Polamalu, however, did make a rare OTA appearance. He usually trains in California to be closer to his family, but he wanted to be in town to work out with his teammates since he and they had rough 2009 seasons.
“I discovered that it’s really nice to be here,” Polamalu said. “Last year was disappointing, so it was good for me to get in here in a football-type environment to see how my knee feels. It’s more strictly training for me in California, but you really can’t simulate 7-on-7 or our team drills.”
Polamalu said his knee feels good enough for him to run around without wearing a protective brace. And if things continue to go well he could remain with the team for more OTAs after the mandatory mini-camp next month.