Ovechkin factored into the Penguins decision to acquire Jordan Leopold 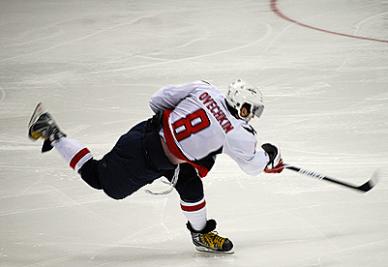 Steeler fans love to reminisce about the good ole’ days. And, by “the good ole’ days” I am of course referring all the way back to… well, 2004.
You remember those good ole’ days don’t you? That’s back when the Steelers ran the ball about 80 times a game and Stiller fans got to yell “Go Bus Go!” a whole bunch. That’s back when Steeler fans didn’t feel conflicted about scoring because they ran it into the end zone instead of it throwing for six points.
Back in those good ole’ days, opponents of the Steelers used to make moves specifically to compete against the Black and Gold.
Remember every April during the draft? NFL analysts used to describe practically every pick by Baltimore, Cincinnati, or Cleveland (heck, even Jacksonville or Tennessee way back in the day) as a “counter Steeler maneuver.”
Every time a nose tackle (see John Henderson, Shaun Rogers, or Haloti Ngata), or a big defensive end, or a run stopping safety or an inside linebacker was selected by the Ravens, Bengals or Browns the move was analyzed in the context of how the other AFC North teams were gearing up to stop the Steeler rush attack.
Well now hockey’s Pittsburgh Penguins may have just done the same thing.
The Penguins acquired defenseman Jordan Leopold today in exchange for a second round pick. And it appears as if this is an Anti-Alexander Ovechkin move akin to one of Baltimore’s many anti-Jerome Bettis moves of years gone by.
Leopold is a 29-year old defenseman formerly of the Florida Panthers. He is perceived to be above average in just about areas.
The book on Leopold is that he is good but not great on the power play, the penalty kill, in his own end, and on the attack.
But after bringing Leopold to Pittsburgh both head coach Dan Bylsma and general manager Ray Shero discussed Leopold’s role when it came to potentially containing Alexander Ovechkin.
In fact Bylsma broached the Ovechkin talk on his own before any reporter in the room could utter Ovie’s name.
“We couldn’t get Hal Gill back. So if you’re looking for a 6’8” guy to come in, he’s not there. Jordan Leopold played against Alexander Ovechkin every shift the last time they played,” offered Bylsma unsolicited.
That game featured just one assist by Ovechkin in a 4-1 Washington win. The previous game between the Panthers and Capitals saw Ovechkin score against Florida. But that was #8’s only mark on the score sheet in a nine goal overtime game Washington won 5-4.
Neither Bylsma nor Shero pledged to use Leopold exclusively as “Ovie deterrent.” But it certainly does seem as if his experience against The Great 8 factored into the decision making process to acquire him for a second round pick.
“When you’re looking at a guy like Leopold (to acquire), you are always looking to see what kind of guys they are playing against whether it‘s Ovechkin or anybody else,” said Shero.
“When you’re playing twenty-two minutes a game like he was in Florida, you’re going to get assignments like that.”
Where Leopold fits into the mix beyond being the Alexander Antidote is anybody’s guess. Byslma hinted he may be on the second power play unit. The seven-year veteran has seven goals and eighteen points on the season.
He’ll probably be in the top six, if not top four, of Penguin defensemen. Both men like Leopold’s Stanley Cup Finals experience, skating ability, and his knack to go the length of the ice and get loose pucks.
Bylsma is on record as saying he prefers to have six defensemen and twelve forwards dressed per game on the roster for the playoffs. But Byslma quickly points out the Pens used eight various defensemen over the course of the post-season en route to the Cup a season ago. “Eight is a lot. Only six play. But if you look at these eight, it’s pretty solid,” says Bylsma.
Pittsburgh’s bench boss is also a fan of throwing different blue-line body types at star players.
“Every defender looks different than the guy next to him,” explained Bylsma. “Kris Letang looks different than Brooks Orpik. But they may be a pair we turn to as a shut down pair as well.”,
If the Penguins make another move before Wednesday, this may mean Jay McKee and/or Martin Skoula are bound for the waiver wire. It may mean Mark Eaton, Alex Goligoski, and/or Kris Letang are trade bait. But keep in mind that Leopold is injury prone and his contract expires after this season. So he may not be here long.
However, if he manages to help contain Alexander Ovechkin in a best-of-seven series Jordan Leopold’s memory in Pittsburgh will extend well beyond June.
And, hey, if things don’t work out here, well, maybe the Ravens will sign him before training camp to cover Santonio Holmes.