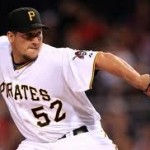 By John Perrotto
In Part I of this series in which I act as pretend Pirates’ general manager, I tackled the subject of what to do with the seven players who are eligible for free agency after the World Series. However, that isn’t the biggest task to take on once the season is over.
There is a possibility that 11 Pirates could be eligible for salary arbitration in the offseason depending upon final major-league service time numbers. Those players are left-hander Brian Burres, closer Joel Hanrahan, first baseman/outfielder Garrett Jones, right-handers Jeff Karstens, Charlie Morton and Ross Ohlendorf, infielder/outfielder Steve Pearce, relievers Evan Meek, Chris Resop and Jose Veras and infielder Brandon Wood.
Pearce could possibly fall short of having arbitration rights if he does not wind up in the top 17 percent of major-league players with more than two but les three years of service time.
The arbitration process is something to be taken seriously, especially for a small-market team like the Pirates who aren’t afforded the luxury of even a mid-size payroll. Players are almost automatically guaranteed raised through the system, oftentimes substantial increases.
With that in mind, it is important to determine which players are worth going to a potential arbitration hearing. I would immediately lop off five of the 11 names by not offering contracts to Burres, Ohlendorf, Pearce, Resop and Wood.
Guys like Burres are easily found. Ohlendorf has reached the expiration date on being a promising young pitcher as he is 29 with a combined 2-14 record and 5.07 ERA in the last two seasons. Pearce has had 521 at-bats in five seasons and hit just .232 with nine home runs and 52 RBIs. Resop’s 6.11 ERA in the second half of this season makes him expendable. Wood flashes the tools that once made him a top prospect with the Los Angeles Angels but he is never going to turn them into consistent production.
That leaves Hanrahan, Jones, Karstens, Morton, Meek and Veras.
Jones and Veras may not be significant pieces to the puzzle but they have value. Veras has pitched in 78 games and posted a 3.73 ERA in 70 innings. Though Jones has proven he is stretched as everyday player but he still has enough pop to be a helpful left-handed bat off the bench.
Veras is making $500,000 this season and Jones has a $455,000 salary. I would make one-year offers of $1.25 to Veras and $1 million to Jones. If they turned them down, they could go elsewhere as free agents.
Karstens, who is making $1.1 million, and Morton, who is making $441,000, figure to get sizeable raises, possible to $4 million and $3 million. That is fine because the Pirates lack starting pitching options and both have been solid in the rotation this season with Karstens going 9-9 with a 3.38 ERA in 26 starts and Morton having a 10-10 record and 3.67 ERA in 28 starts.
Meek should be an easy case to settle as he can’t make much of an argument in arbitration after appearing in just 22 games and pitching 18 2/3 innings this season because of a shoulder problem. He is making $461,500 and likely wouldn’t be bumped up to more than $800,000. He is worth the gamble at that price remembering back to his2.14 ERA in 70 games and 80 innings in 2010.
Hanrahan is going to be the big money guy following an outstanding season in which he has 39 saves and a 1.76 ERA in 57 games. His $1.4 million salary is likely to reach at least $5 million and possibly as high as $7 million.
While a shutdown closer helps a team’s psyche because it knows it is usually going to win the games it is supposed to win, it is also a luxury to spend at least $5 million for someone likely to pitch no more than 70-75 innings on a team far from being a surefire contender.
While I would go the distance to a hearing with Hanrahan if need be, I would also field trade offers in an attempt to see if holes could be filled at catcher and first base, and possibly even the rotation.
Trading Hanrahan certainly wouldn’t be popular with the fans. After 19 straight losing seasons, though, a GM should be open to all options.
Even a make believe GM.
—
John Perrotto has covered and Major League Baseball for 24 years.