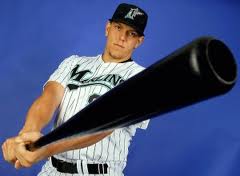 By John Perrotto
In my turn as the pretend Pirates general manager, I have already addressed the internal issues by deciding which free agents to attempt to retain and how to deal with the players eligible for salary arbitration.
Now, it’s time for the third and final part of the off-season planning–deciding who might be available outside the organization that that is affordable and could help the Pirates in 2012.
The first thing I would do is pick up the phone and call Florida general manager Larry Beinfest and see if he is interested in trading left fielder Logan Morrison. At 24 and with a left-handed gap-to-gap swing seemingly tailor made for PNC Park, Morrison would be a perfect fit and he could not be a free agent until after the 2017 season.
Morrison, in his first full season, is hitting .248 with 22 home runs and 71 RBIs in 120 games with a .349 on-base percentage and a.465 slugging percentage.
Why would the Marlins trade him? Because he isn’t scared to speak his mind and made his share of inflammatory tweets this season.
Morrison’s power trumps anything on Twitter and his natural position is first base. If I don’t get Derrek Lee re-signed, Morrison can play first. If Lee returns, Morrison can play left field and Alex Presley would become a fine fourth outfielder while backing up Morrison, center fielder Andrew McCutchen and right fielder Jose Tabata.
I’d also place another call to Colorado GM Dan O’Dowd and see what it would take to get catcher Chris Iannetta, who hasn’t been able to get out of manager’s Jim Tracy’s doghouse. Iannetta’s batting average is just .238 but he has hit 14 home runs in 110 games with a .370 OBP and a .416 slugging percentage. He is certainly better than what the Pirates have.
Making Iannetta even more attractive is that he is already under contract for next season at $3.55 million and has a club option for $5 million for 2013 with a $500,000 option, though he can void the option if traded and file for free agency.
A free agent catcher worth considering would be Ramon Hernandez. He is 35 but still considered a good caller and is hitting .283 with 12 homers, a .340 OBP and a .448 slugging percentage in 90 games for Cincinnati while drawing a modest $3 million salary.
Since I have decided to exercise Paul Maholm’s player option for 2012, all five spots in the rotation are already seemingly set for next season with the left-hander being joined by Kevin Correia, Jeff Karstens, James McDonald and Charlie Morton.
Still, the Pirates found the old adage that you can never pitching to be true when their descent from first place to also-ran began in late July. Thus, it would behoove us to add a veteran starter for depth purposes and also to provide some spring training competition through free agency if a bargain can be found. Three interesting starters without large price tags might be had for a decent price: left-handers Chris Capuano and Jeff Francis and right-handers Livan Hernandez and Joel Pineiro.
Capuano, 33, has gone 11-12 with a 4.55 ERA in 28 games, 26 starts, for the New York Mets but he has struck out 7.9 batters per nine innings. Francis, 30, is 6-16 with a 4.84 ERA but has logged 186 innings in 32 starts for Kansas City. Hernandez has gone 8-13 with a 4.47 ERA in 29 starts and 175 innings for Washington, though he is 36 (in Cuban years). Francis ($2 million), Capuano ($1.5 million) and Hernandez ($1 million) all have very reasonable salaries and likely wouldn’t break the bank this upcoming winter.
All have had success in the past and are finishing the season healthy, making them worth taking a shot on at the right price. And as the Pirates’ GM, pretend or not, the price always must be right.