Perrotto: McCutchen one of the central figures in race for NL batting title that is like no other in baseball history 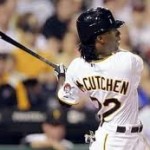 By John Perrotto
The race for the National League batting title is like no other in baseball history and Andrew McCutchen is one of the central figures.
Yet the Pirates center fielder claims he is not paying attention to who is leading the league in hitting.
“I don’t look at the stuff,” McCutchen said. “The only time it enters my mind is if someone asks me about it and the only people who ask me about it are in the media.”
McCutchen will take a .345 batting average into Friday’s opener of a three-game series against the Chicago Cubs at PNC Park after the Pirates have today off. That puts him one point behind San Francisco left fielder Melky Cabrera, who is hitting .346.
Here’s the catch, though, Cabrera is locked in at that average for the rest of the season as he serves out a 50-game suspension for using performance enhancing drugs. Thus, there is no moving target. McCutchen knows exactly what he needs to do to win the batting title and that is hit .347 or better.
Rounding out the top five are San Francisco catcher Buster Posey (.325), St. Louis catcher Yadier Molina (.323) and New York Mets third baseman David Wright (.313). They would need to have torrid Septembers, though, to catch Cabrera or McCutchen.
McCutchen insists he is much more concerned with the NL wild card standings. The Pirates drew within 1 1/2 games of St. Louis for the second NL wild card on Wednesday night when they beat the Houston Astros 6-2 at PNC Park while St. Louis lost by the same score to the Mets. The Los Angeles Dodgers are also 1 1/2 games behind the Cardinals.
“I just worry about what I need to do every day to help this team win,” McCutchen said. “I know the situation with Melky but it really has no impact on me because we’re trying to get to the playoffs. That means more to me than any personal goals. Sure, I’d like to win the batting title but it’s the least of my priorities right now. If I play well enough to help the team win then the other stuff will take care of itself.”
There is the inherent good guy/bad guy plot that goes with McCutchen trying to overtake Cabrera. McCutchen, of course, is the good guy for being clean while Cabrera is the bad guy for getting caught doping.
However, McCutchen doesn’t want to play along with that storyline.
“I don’t look at it that way,” McCutchen said. “Melky is Melky and I’m Andrew. People really haven’t made an issue about with me, whether it’s my teammates or fans or whoever. I know there’s a story in there but I really don’t think it’s very important compared to the pennant race.”
And the fact that McCutchen is the favorite to become the first Pirates player to win the NL Most Valuable Player since Barry Bonds in 1992? McCutchen isn’t going there, either.
“My teammates know how I feel and it’s that winning is the most important thing,” McCutchen said. “It wouldn’t be fair to my teammates if I ever put personal goals ahead of team goals and I am a team player.”