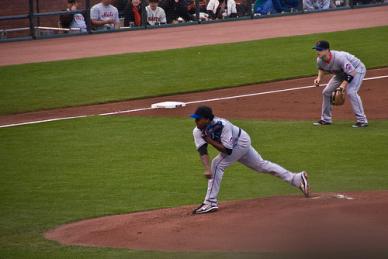 By John Perrotto_ The Pirates are still exploring the possibility of adding a free-agent pitcher before the April 6 opener at St. Louis but the possibility of that happening isn‚Äôt great.
‚ÄúIf there is a move that would make us better and be a good fit, we would consider it,‚Äô Pirates general manager Neal Huntington said. ‚ÄúThat being said, I feel comfortable with the players we have and I would be fine with going into the season with a 25-man roster comprised of players already in our camp.‚Äù
One free agent who can be scratched off the Pirates‚Äô list is right-hander Pedro Martinez. He continues to want a major-league contact with at least a $5-million base salary with the opportunity to make an additional $5 million in performance bonuses.
The Pirates went into the offseason wanting to add a veteran presence in their starting rotation. However, they have been encouraged enough by the strides made by their starting pitchers this spring that they no longer feel a veteran stabilizer is a necessity.
One starter the Pirates have at least passing interest in is
left-hander Odalis Perez, who originally re-signed with the Nationals on a minor-league contract that would have paid him $850,000 if he made the major-league club. Perez then did an about face, refused to report to camp unless the Nationals gave him a major-league contract and wound up being released.
The Pirates, though, are only interested in bringing Perez in on a minor-league contract and would make no guarantees that he would start the season in the major-league rotation or be placed on a big-league roster by a certain date during the season.
The Pirates continue to look at the possibility of adding a left-handed reliever, though not necessarily with the idea of trading John Grabow but to serve as the second lefty out of the bullpen. They have reportedly offered one-year, $1-million deals to both Joe Beimel and Will Ohman.
While Beimel began his major-league career in 2001 with the Pirates, played at Duquesne and grew up in Elk County, he is said not to be that keen about returning to Pittsburgh. Ohman would prefer to sign with a team that has a better chance of contending.
Photo courtesy of Bryce Edwards