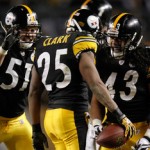 By Dale Grdnic
PITTSBURGH — The Pittsburgh Steelers’ offensive line took a big hit last week when rookie Marcus Gilbert had to replace Willie Colon at right tackle, and Ramon Foster stepped in for Chris Kemoeatu at right guard.
There almost was more turmoil this week, as second-year center Maurkice Pouncey only practiced on a limited basis Wednesday due to a hamstring injury. The crisis was averted, however, as Pouncey returned to a full practice Thursday and proclaimed himself ready to play this week.
The Steelers face the Indianapolis Colts Sunday night at 8:20 at Lucas Oil Stadium in Indianapolis, Ind.
“I don’t really know when it happened, but it doesn’t have anything to do with my (left) ankle,” Pouncey said.
“That’s another situation all together, but I’m fine now and ready to go.”
Kemoeatu (left knee) also practiced both days this week after missing this past game, while reserve running back Jonathan Dwyer (left shoulder) practiced on a full-time basis Thursday after a limited workout the day before.
However, defensive end Brett Keisel missed a second straight practice and likely will not play due to a PCL sprain in his left knee. Ziggy Hood would replace him at right end. Hood started he final regular-season games and all three post-season contests at left end for Aaron Smith last year.
Offensive coordinator Bruce Arians said it’s likely the club will dress six wideouts this week, as Jerricho Cotchery (hamstring) practiced both days and has not had any problems after being out since the second preseason game.
“We feel real good about our game plan, but the run part of it doesn’t concern us as much as the pass part because they’re such tremendous pass-rushers,” Arians said. “So, we think we have a good plan for them, but we’ll see what happens Sunday night. We won’t know for sure until afterward.”
Cotchery was just happy to get through two practices this week without any setbacks.
“I’m progressing very well right now,” Cotchery said. “Yesterday was a great start for me. I didn’t have any setbacks or surprises when I woke up this morning. We’re just taking it day-by-day right now.
“But (Wednesday) was a huge day. You always want to see how your body responds, and I got a lot of work in, a lot of work, and my body responded very well to it. So, now, I’m just trying to keep moving forward and go from there.”
Although Bryant McFadden practiced again today and should play, Steelers defensive coordinator Dick LeBeau said team will go with same secondary as last week, meaning William Gay will start again opposite Ike Taylor. And LeBeau expected someone on the Steelers defense to finally force a turnover this week after they didn’t get any in the opening two games.
“Takeaways are important, but almost any category that you can name is important,” LeBeau said. “You want to be good at everything. You look back at the course of the history of football, teams that get a lot of turnovers usually have success in terms of wins and losses. So, turnovers are always important.
“(But) are you trying to tell me that our turnovers are down? We’ve only played two games, but we’ll turn the ball over. Getting turnovers are kind of like sacks. You get good pressure, and the sacks will come. And if you’re in good position and seeing what you’re supposed to see, being where you’re supposed to be, you’ll get some interceptions. And you’ll get your share of fumble recoveries.
“That’s always been a goal of ours, to get turnovers,” LeBeau added. “And our goal is two per game — at least one interception and one fumble recovery. So, we haven’t gotten any yet, but we’ve only played two games. We played pretty well in the last game and didn’t get any, but if we continue to play that well we’ll get them sooner rather than later. That’s for sure.
Notes: Steelers right guard Doug Legursky was fined $10,000 by the NFL, the minimum for personal fouls, after a clipping penalty against Seattle. … Wideout and H-back Dorin Dickerson, who played scholastically at West Allegheny and collegiately at Pitt, had surgery on an injured thumb from his first day on the Steelers practice squad last week. He is on the practice squad-injured list.