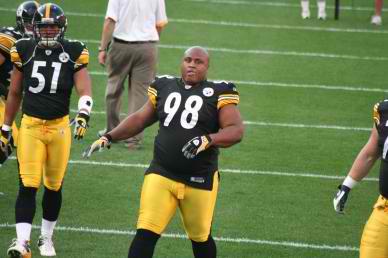 By Dale Grdnic
PITTSBURGH — Pittsburgh Steelers nose tackle Casey Hampton is about as laid-back as they come, basically a good-old boy from Texas who speaks his mind and doesn’t get bothered too much about what other people think.
So, there isn’t too much that stirs him up, except possible a vicious chop block by an opposing offensive lineman. And he likes to say that his job is easy. Hampton just has to line up, then move left, right or stay straight.
“All I have to do is stay with the dude in front of me, and if you mess up whippin’ a guy’s ass, Coach Tomlin can deal with that,” Hampton said before letting out a huge belly laugh. All I have to do is play nose tackle, man.
“That’s all I can do. I can’t do nothing for nobody else. So, I just have to go out there and play nose tackle. Seriously, that’s all I can do, man. I just have to do my job.”
It’s been a while since Hampton was asked to drop back into pass coverage as part of that job, but he said that set probably will be scrapped now that Chris Hoke out for the season after neck surgery Wednesday morning.
That’s Hokie’s defense,” Hampton said. “So, with him out, I think they’re going to scratch that. He’ll get mad if we run it without him. But I like it. I’m a former linebacker, you know, back in the day. I had the sweetest drop, sweetest feet and drop, if you’ll check the tape.
“I don’t know why you don’t see it too much, because I’m not getting any sacks, so I might as well drop back and try to cover somebody. (Another big belly laugh). But Hokie’s doing good. He stopped by today after being released from the hospital, and he’s never going to be unable to talk. Hokie’s a talker.
“That’s what he does, so … maybe they helped him out a little bit and opened it up more for him when they got in there. We might never know.”

Ziggy Hood is expected to be back at left defensive end after leaving the game early against the Cleveland Browns due to a right groin strain. He practiced on a full-time basis Thursday, as did left outside linebacker LaMarr Woodley. So, he is expected to play as well.
With Harrison’s suspension appeal likely denied, Jason Worilds would get the nod in the starting spot. He has started four of the past five games for Woodley, the team’s top sack-man with nine, and he was Harrison’s backup early in the season. But a quad injury set him back a bit, so Lawrence Timmons moved outside for Harrison since Worilds couldn’t play. But he’s ready now.
“I’ve played both sides, so I’ll be all right,” Worilds said. “But it is different, playing on the right side now as opposed to the left side when Wood was out. You’re seeing the game from a different perspective, but that’s why we have practice. So, I’m go out this week and try to get all the work in that I can.”
Hood, who is second with 19 to Brett Keisel’s amazing 32 quarterback hurries this season despite missing two-plus games, believes he hasn’t appeared to push it yet in practice, but there are still two more days to go.
“I think I’ll be ready to go,” Hood said. “I’m a little better each and every day, but it’s the right side of my groin. And it can be a tough injury to overcome, sometimes, but if you take control of it right away and take good care of it, everything should work out in the end.”

Chris Kemoeatu, who signed a $20 million contract with half in guaranteed money in 2009, apparently is the scout-team left guard. Steelers offensive coordinator Bruce Arians said Thursday that if Doug Legursky has to start at center for Maurkice Pouncey, veteran Trai Essex will start at left guard.
“(Chris) has had some physical limitations all year (nagging knee injury for one), and it has affected his technique,” Arians noted. “But we can’t have the penalties. The efforts always there, but we’ve got to get rid of the penalties.”
Kemoeatu came up with a hat trick for penalties against the Browns with two holding calls and a hands-to-the face call that he likely will be fined for the second time this season.

Starting center Maurkice Pouncey, like Roethlisberger, has a high left ankle sprain. It’s the same injury that he suffered last season in the AFC championship game, but that one was much worse. It was a Grade 3 sprain, the highest and most severe, while this one is a Grade 1 like Roethlisberger’s.
“I guess we’ll know more Friday or Saturday, but if I can go on Monday, then I’ll go,” Pouncey said. “I couldn’t even walk for the Super Bowl, but I’ve been out of the boot now after a couple days in it. I’m not doing anything right now, but maybe (Friday) or Saturday I’ll get a practice in.
“(But) it’s tough with a bad ankle, because you’ve got to drive 340-pound guys off the ball every play. And that’s tough enough to do with two good ankles, but on one bad one it’s really hard to do. There’s pain, and the mobility is an issue, so that’s what I’m looking at right now. But we’ll know more in a day or two.”

Joining Roethlisberger and Pouncey on the did not practice list Thursday were wideout Emmanuel Sanders (right foot), linebacker Chris Carter (hamstring), offensive tackle Marcus Gilbert (illness) and strong safety Troy Polamalu (hamstring). Gilbert is expected to be back Friday or Saturday, along with Polamalu, and play against the Niners Monday night.
Wideout Arnaz Battle (hamstring) and cornerback Curtis Brown (knee) were limited in practice Thursday, but they both should be ready by the end of the week to play Monday night.