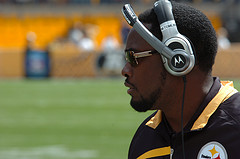 Q&A with Mike Tomlin
Steelers coach Mike Tomlin met with the media Thursday after the last of the 14 scheduled voluntary organized team activity workouts. Mike Bires, who covers the Steelers for Inside Pittsburgh Sports, was among the reporters on hand. Here are portions of the interview:
Q: How did you ward off complacency so what happened in 2006 to the Steelers doesn’t happen this year?
A: “I am not concerned about what happened in ’05 or ’06, or in ’07 or ’08 for that matter. I am a singularly focused guy. My single focus is on developing a world championship-caliber team for 2009. 2008 was great – it was an awesome team. Where we are now is where we are. Where we are headed, more importantly than that, is our focus.”
Q: Where do you from here in your third year as coach?
A: “I better get better. That is the nature of this thing. Getting better doesn’t necessarily always mean a better outcome – I understand that. I am always trying to become the best I can be. I am as critical of myself as anyone. I think that is appropriate from a leadership standpoint. Those are some of the things I am in the process of doing right now – rehashing and reviewing some of the things I do as I lead this group of men. Hopefully I will do a cleaner and more efficient job here in ’09.”
Q: What is life like without linebacker Larry Foote and can you talk about that situation?
A: “It was great to see him the other night at the (Super Bowl) ring ceremony. It will be a little bit duller around here from a personality standpoint because he has that personality. In terms of the plays and the quality of play, I don’t anticipate any drop-off. The standard is the standard. Lawrence (Timmons) is a quality football player. We expect him to play great, to be quite frank with you.”
Q: This year, what are you looking for out of Ben Roethlisberger (who didn’t attend Thursday’s OTA)?
A: “I measure Ben on whether we win or lose. I think that that comes with the quarterback position in this league. The great ones lead their team to victory. The guy that you think about when you think about the quarterback position, Peyton Manning, Tom Brady, they are who they are because they win. Ben is a very talented guy, he puts up impressive numbers, he is capable of doing all of the individual things, but ultimately he will be defined and I will be defined quite honestly, by how much we win.”
Q: Do you see any depth issues or is the roster set?
A: “More than anything right now, we are trying to focus on how to get our number down to 80, which of course is the training camp number. We are over it at this point (with 88 players on the roster). So it is more of a subtraction mentality than it is an addition mentality.”