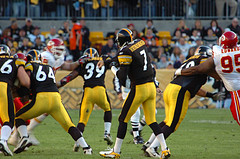 By Mike Bires
With the start of training camp just 10 days away, the Pittsburgh Steelers have a distraction on their hands. Ben Roethlisberger has been accused of sexual assault.
But despite a civil suit filed by a woman from Nevada, an attorney representing Roethlisberger denies claims that the Steelers’ star quarterback committed sexual assault.
Late Monday night, Steelers communications director Dave Lockett forwarded a statement via e-mail regarding the situation.
“This weekend Andrea McNulty served Ben Roethlisberger with a civil complaint accusing him of sexually assaulting her in July 2008. Ben has never sexually assaulted anyone, especially Andrea McNulty,” David Cornwall, Roethlisberger’s lawyer, said in that statement.
“The timing of the lawsuit and the absence of a criminal complaint and a criminal investigation are the most compelling evidence of the absence of any criminal conduct. If an investigation is commenced, Ben will cooperate fully and Ben will be fully exonerated.
“Ben will not be baited into a public discussion about his personal life, but we will defend him vigorously. The limited value that Ms. McNulty derived from public disclosure of these viciously false allegations is the only value she will ever receive from Ben in this case.”
The allegations against Roethlisberger were originally reported by ProFootballTalk.com, an Internet web site that said Roethlisberger was served the suit over the weekend.
This past weekend, as he does the past few years, Roethlisberger played in a celebrity golf tournament in Tahoe, Nev.
According to the PFT report, Roethlisberger faces one civil count of assault, one civil count of sexual assault and battery, one civil count of false imprisonment, one civil count of false pretenses, one civil count of fraud, and one civil count of intentional infliction of emotional distress.
McNulty alleges that Roethlisberger forced her to have sex with him in his hotel room in July 2008. McNulty reportedly works at that hotel.
Meanwhile, Roethlisberger is expected to take part later this week in the filming for “Shaq Vs.” That’s a reality TV show starring Shaquille O’Neal, the Cleveland Cavaliers’ 7-foot-1 center.
On his show, O’Neal has challenged several sports superstars such as boxer Oscar De La Hoya, baseball slugger Albert Pujols and cyclist Lance Armstrong in a competition related to their sport.
The O’Neal vs. Roethlisberger challenge will take part on Friday, July 24, around 6 p.m. at Ambridge High School in Beaver County.
It will air on ABC at 9 p.m. on Tuesday, Aug. 18.