Roethlisberger: Mendenhall emerging as a “top 5 back” 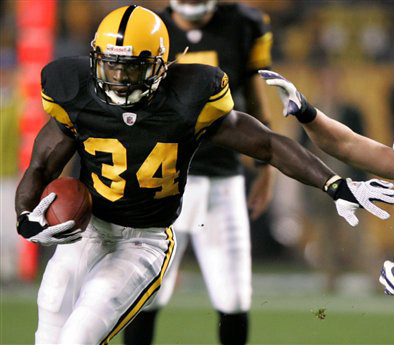 Bruce Arians, the Pittsburgh Steelers offensive coordinator has compared running back Rashard Mendenhall to a Marshall Faulk in the sense that Mendenhall is a “do it all” unique complete kind of running back.
Mendenhall rushed for 84 yards, 1 touchdown and had 99 total yards in the Steelers 28-10 win over the Cleveland Browns.
His presence is felt in a numbers of areas that don’t always show up in the box score. Quarterback Ben Roethlisberger had high praise for Mendenhall regarding his blitz pickups and also saying he has that Heath Miller effect about him.
Roethlisberger believes Mendenhall is not only emerging as a top-5 back but has the potential to be one of the elites, maybe even in the best back in the game.
Roethlisberger on Rashard Mendenhall:
“I tell you what, from watching from a distance, watching him up close, he’s emerging as a top 5 back in this league with the potential to be one of the elites, a 1 or 2, or 3 back in this league, ” Roethlisberger said.
It’s kind of the Heath Miller effect, ” Roethlisberger said. “Not just about yards and running the ball. You sit there and watch some of the blitzes he picks up, when he stones linebnackers in the hole and lets me complete balls down the field, things like that. Catching the ball, all those things make him elite. He’s truly grown into a really good back.”