Russell will likely be the fall guy 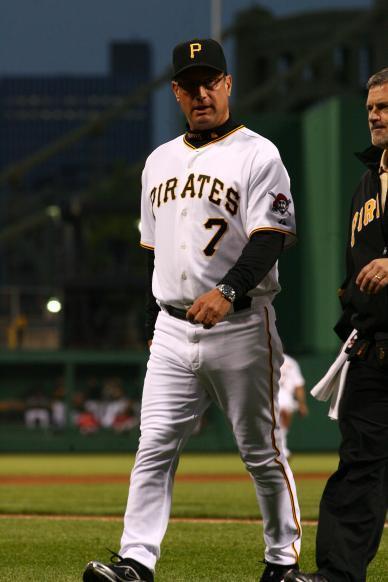 Pirates lack accountability throughout their organization
Photo: David Hague – Inside Pittsburgh Sports
The Pittsburgh Pirates have hit a new low, being outscored 72-12 during their current seven game losing streak and posting a major league worst run differential of minus-82 (147-65) through 19 games.
The latest blow was a 17-3 loss to the Milwaukee Brewers Monday night.
Industry sources indicate the likely fall guy of the Pirates early struggles will be manager John Russell. Russell is entering a crucial stretch of games where his job is going to be on the line.
Russell who is in the final year of his contract, did not receive a contract extension from Pirates ownership this off-season. Ownership has made it known that success in 2010 would dictate Russell’s future with the team beyond 2010.
A lack of talent on this team is not Russell’s fault. This is a flawed baseball team in all areas. However, a concern inside the organization is that Russell appears to have lost the team.
Losing 90-100 games was expected this season, but not the way Pittsburgh is losing right now.
The primary issue for the Pirates is a lack of accountability throughout the organization.
The Milwaukee Brewers are nothing to write home about, their a 9-10 baseball team, but the Brewers are a prime example of a small market team that shows accountability inside their organization.
Not only is their payroll in the $85 million range but on Monday the Brewers removed right hander Jeff Suppan from the rotation who is in the fourth and final year of his $42 million contract.
Suppan went 0-1 with an 8.68 ERA in two appearances as the fifth starter. The message from manager Ken Macha is that Chris Narveson, the new No. 5 starter gives them the best chance to win.
By contrast, the Pirates won’t make such a move with starter Charlie Morton who has the second worst ERA (16.23) in major history for the month of April.
Putting Morton back on the mound every 5th day is a slap in the face to players like Andrew McCutchen who give their all on a nightly basis.
It sends the wrong message and the Pirates losing culture will never change until there is accountability.
Lazy plays from veterans has also been extremely concerning for the Pirates. A lazy breaking ball by Zach Duke to Gregg Zaun with the bases loaded opened up the flood gates in Monday’s loss and a lazy play by catcher Ryan Doumit, who failed to block the plate on a routine throw to home should be unacceptable.
Doumit should have been immediately taking out of the game by manager John Russell.
While the front office surely won’t make players accountable, a message needs to be sent by the manager.