Saturday’s Camp Report: Experience could give Redman an edge for No. 1 RB spot if he can stay healthy 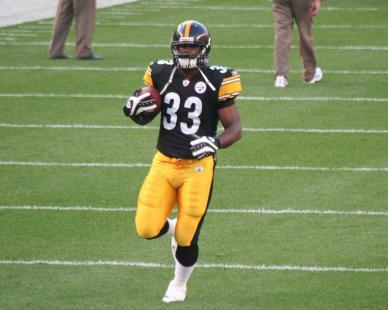 SATURDAY’S CAMP REPORT
By Dale Grdnic
LATROBE, Pa. — Among the more hotly contested positions during this Pittsburgh Steelers training camp at Saint Vincent College is at running back, where no fewer than five players are competing for playing time.
Fourth-year players Isaac Redman and Jonathan Dwyer and third-year pro Baron Batch are holdovers from last year’s team, while fifth-year veteran LaRod Stephens-Howling was a free-agent signee. Rookie second-round pick Le’Veon Bell was drafted this year to join the competition for the starting spot vacated when Rashard Mendenhall was not re-signed.
“We have a lot of good players competing at the position, and we’ll see how things shake out through camp and the preseason,” Steelers running backs coach Kirby Wilson said. “We’d like to have one guy to carry the load, kind of like Rashard did for a couple seasons, but we’ll use everybody if we have to.”
Injuries, inconsistency and Mendenhall’s bad attitude dogged the running backs last season, and the Steelers plummeted to 26th in the 32-team NFL in rushing. That ineptitude hampered the offensive, according to Redman, but it also forced the Steelers to emphasize the running game even more.
“As far as our offense goes, I feel like we can be a lot better than we were last year,” Redman said Saturday before the initial training camp practice. “We pretty much ended the season with a suspect running game, and that hurt our passing game. So, everybody just has to do their part, and we can get this thing rolling again.”
Stephens-Howling basically was signed to replace Chris Rainey, the speedster who was released after a solid rookie season, due to off-field issues. During four seasons with the Arizona Cardinals, Stephens-Howling developed into an electrifying kickoff returner and solid change-of-pace back.
“I know the offense Coach Haley likes to run,” Stephens-Howling said. “He uses his backs on third-down and short-yardage situations. And I believe that I can be that type of back for this team, running the ball or catching passes. I’ve had some success in this league doing both.
“I want to return kicks, too, but right now I’m just competing to gain the trust of my coaches and teammates so I can be part of the mix in September. And it’s a great mix we have in our running back room. We have a lot of experience, even though we’re relatively young.”
Extreme youth might be served in the Steelers running game, as some believe Bell eventually will secure the No. 1 job. He was capable of getting 20-25 carries per game while at Michigan State, while the others have not had that type of work load. So, if he can maintain that level of success and be durable, the starting advantage could tilt toward Bell.
“I just want to come in here and compete,” Bell said. “Whatever role that I get, I just want to do the very best that I can at that role, whether it’s being the starter or coming in on third downs or just playing special teams. Whatever it may be, I’m going to succeed in that role.
“And I’m going to try to help this team get its seventh ring. (But) you wouldn’t play the game of football if you didn’t want to compete and go out here and get some playing time and help contribute to wins. That’s what I’m going to go out there to do I’m going to help this team win games.”
Experience could give Redman an edge, but health was an issue last year. A preseason hip injury and two ankle sprains during the season derailed his progress. Redman missed two games and started just five in 14 games with just 410 yards rushing and two scores. He added 19 catches for 244 yards.
“I had one ankle sprain, and then I sprained the other one during the Titans game,” Redman said. “But I feel great now. I’m healthy and ready to go. I wasn’t surprised that they brought in Le’Veon to help this team. That creates a lot of competition. It also fueled me during this past offseason.
“It gave me a little chip on my shoulder while I was working out, so I had to prepare myself to compete at a high level during this camp. That was my fuel the whole summer while I was working out. … I just look at it like we’re all here to help this football team win games, and the players who can do that are the ones who will get the most playing time. I just want to be one of those guys.”
Dwyer had 623 yards rushing and two scores last season to go with 18 catches. Batch was off and on the roster last season and tallied minimal stats after spending his rookie season on injured reserve. Stephens-Howling hasn’t run the ball much in his four NFL seasons, but he tallied 110 catches last season. Bell ran for 33 touchdowns and more than 3,300 yards during his Michigan State career with nearly 1,800 yards and 12 scores.
Good health, as along with productivity, should determine who plays the most at running back for the Steelers this season.