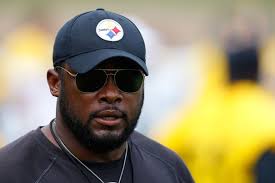 SATURDAY’S PRACTICE NOTES
By Dale Grdnic
LATROBE, Pa. — The much-anticipated goal-line drill was won by the defense during training camp Saturday at Saint Vincent College, but the Pittsburgh Steelers top two draft picks — outside linebacker Jarvis Jones and running back Le’Veon Bell — watched from the sideline due to minor injuries.
The offense, led by backup quarterback Bruce Gradkowski, ran six plays and scored twice — a blast up the middle by Jonathan Dwyer from about five yards out and off a slick play-action pass from Gradkowski to tight end David Paulson — and there was a lot of hard hitting in between.
“Not good work today, but great work,” Steelers coach Mike Tomlin said. “We had a little situational football, as we continue to grow in that area. Red zone was an emphasis today, particularly some pod-type work with guys working collectively against each other in groups of three and two.
“Obviously, we did short-yardage and goal-line, so it was a nice ebb and flow. The offense won the short-yardage, but the defense came back and won the goal-line. Such is life at this time of year, if you’re growing and growing in the right way. So, we’ll continue to create an environment that’s competitive.”
On first down, running back Baron Batch tried to run behind fullback Will Johnson, but left end Cameron Heyward caved in the right side and stopped Back in the backfield for a loss. On second down, Gradkowski faked a run to Batch and looked toward a wide-open Paulson in the far left corner of the end zone, but the pass sailed high and wide out of bounds.
On third down, tight end Jamie McCoy joined the backfield as a blocker for Dwyer, but he didn’t appear to make an inch after taking the handoff from Gradkowski. End Ziggy Hood got some penetration, and inside linebacker Vince Williams — the club’s second sixth-round pick — shot the gap and stopped Dwyer for about a five-yard loss.
The offense appeared to be on its way to being shut out, but on fourth-and-goal Will Johnson threw a big block on Larry Foote, and Dwyer squeezed over the goal line. Foote argued vehemently, but to no avail. Ben Roethlisberger ran up to the line to console Foote, but he didn’t want to hear it.
The fifth attempt ended with the same result, as Gradkowski faked a handoff to tailback LaRod Stephens-Howling. He was drilled in the backfield and knocked to the ground. Tomlin said after the play that the back was the intended target for Gradkowski, but that didn’t matter. The quarterback quickly scanned the field and found Paulson open in the end zone.
Stephens-Howling got a chance to run the ball on the sixth attempt, but he was stopped for a loss, as the entire left side of the line was caved in. So, the final tally was 4-2 defensive win with two touchdowns allowed. The big hit was a perfect way to end the first week of camp, as Tomlin kicked the intensity up a notch during the practice sessions.
“We’re young in a lot of areas, particularly the lines,” Tomlin said. “We’ve got young, talented defensive linemen and young, talented offensive linemen. And the only way to improve is to play football. … This way, they are given an opportunity to show what they’re capable of.”
Walking Wounded
Tomlin clearly didn’t feel like discussing the injuries.
“Obviously, we’ve got a number of guys who are out with a myriad of minor training camp-like nicks, and I’m not going to get into details about that,” Tomlin said. “Many of these guys will be working there way back in the next 24-48 hours.”
The lengthy list of players on the sideline included Le’Veon Bell, left knee; Jarvis Jones, right knee; Matt Spaeth, right knee; Jason Worilds, right big toe; Cortez Allen, right knee; Curtis Brown, left hamstring; Nick Williams, left knee; Terry Hawthorne, right knee; DeMarcus Van Dyke, right hamstring; Adrian Robinson and Brett Keisel, unknown.
Bell, Jones, Spaeth, Robinson and Keisel probably are close to returning, but Keisel missed a second straight day. So, it’s unlikely that they were just days off, which it was originally speculated to be. Brown also could return, and it would be a good idea for him to do that if he wants to make the team.