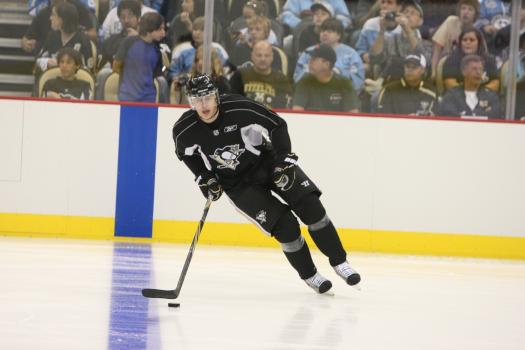 The signing of GM Ray Shero to a five-year contract extension is as important as any deal the Penguins have negotiated since Shero joined the franchise in 2006. He would have had no shortage of suitors had free agency ever beckoned.
The Penguins’ priorities, roster composition, contract lengths, knowing when the team is close, what’s needed to get there…it’s all Shero’s vision. I believe it’s the right vision. To deter from that vision for any reason would require losing a year or two to overhaul. The Penguins should use that year or two to win championships. Furthermore, the Pens’ stars seem to have faith in Shero.
Me, too. I know hockey. If you don’t know what you’re talking about, I can nail you to the wall, be right every step of the way, and make you suffer, then suffer some more. Shero knows what he’s doing.
I don’t mean to imply that Shero is autocratic. Far from it. The Penguins have a solid organization from top to bottom. The owners, the coaches, the scouts…everyone is heard. That was Herb Brooks’ philosophy: Lots of voices.
But Shero is in charge. No mistake. Craig Patrick used to be great. But by the end of his tenure as GM, he was letting the equipment manager make important decisions. Patrick hired Eddie Olczyk to coach because Edzo happened to be walking down the hall at an opportune time.
That won’t happen with Shero. He won’t waver. Destiny has a new home. This is the start of a hundred-year dynasty. Someday they’ll build a statue of Ray Shero.
I’d be bored listing Rejean’s accomplishments. You’d get bored reading them. But Shero handled free agency like a maestro this past off-season – witness the signings of Zbynek Michalek and Paul Martin, as well as the timing and tap-dancing involved thereof – and has hockey’s best nucleus committed long-term. He’s not old-school. Shero is a classic cap-era NHL GM.
Shero, by the way, was on the mark when he signed Arron Asham and Mike Comrie. Some fans think Shero should have let homegrown prospects like Dustin Jeffrey, Nick Johnson and Mark Letestu plug gaps. Nonsense. The Penguins are a legit Cup contender. Why take a chance when low-budget proven commodities are available? If Jeffrey and his ilk are worthy, they’ll get their chance.
Who will be the beneficiary of Jordan Staal’s absence? Probably Lestestu, but maybe Eric Tangradi. Tangradi has been skating with Comrie and Evgeni Malkin. That trio has a lot of potential. Matt Cooke would be miscast if, as mooted, he plays on a line with Malkin. Asham, Cooke and Max Talbot, however, would be a prototypical third line.
I really like Letestu. Letestu does exactly what he’s told, embracing it all the while. Some other Penguins prospects (and a few Penguins) too often indulge their own vision.
Speaking of which…
Tyler Kennedy has done well in camp’s early going. He needs to. Kennedy got away from his game last season. Kennedy needs to be about grit and forechecking, not stickhandling and shooting. Last year, Cooke told me Kennedy’s nickname was “Shooter.” I don’t think he meant it as a compliment.
I hope TK has the good sense to return to what made him a big contributor on a Stanley Cup winner in 2009. When he plays THAT way, he’s very good. When he doesn’t, he sucks. No middle ground.
Brett Sterling scored two goals in Monday’s scrimmage. He could score a million. He could score every time he touches the puck. He could shoot a puck that would split in half and regenerate as two whole pucks, with one going in each net. It wouldn’t matter. He’s not making it.
Mark Madden hosts a radio show 3-6 p.m. weekdays on WXDX-FM (105.9).