SO YOU ARE TRYING TO TELL ME THAT…. 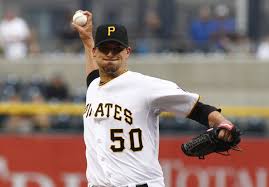 SO YOU ARE TRYING TO TELL ME THAT….

…Elias Diaz &/or Charlie Morton are too big of a return for Neal Huntington to stomach in a potential trade involving Mitch Moreland?!: If that’s what Neal Huntington is telling Texas, then maybe he isn’t the general manager we think he is. Moreland is only expected to make about $5 million in arbitration this year. And he hit 23 homers while driving in 85 runs last season. Plus he bats left handed and only made four errors this season at first base in 2015. If the rumors are true that Texas wants either Charlie Morton or Elias Diaz (or even both) in exchange…that shouldn’t be too big of an ask for Huntington.

If Huntington does balk at that request, it’s a classic case of over valuing a prospect at the potential expense of acquiring a major league ready player. Diaz is the tenth best prospect in the system. But he still projects to be nothing more than a defense-first catcher. He doesn’t have to be treated like Buster Posey was coming up with the Giants or like Blake Swihart was being viewed by the Red Sox. Plus Reese McGuire is the sixth best prospect at the same position.

And as far as Morton goes, you already know what he is. Would you rather have an above average first baseman? Or an up and down 3rd/4th starter? 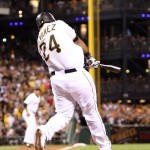 …Neal Huntington is trying to blame Pedro Alvarez’s “early” call up for his eventual departure?!: Huntington recently told the Tribune Review that he regrets bringing Alvarez to the big leagues “before he was ready.” Come on, Neal. You don’t expect us to buy that do you? You can’t even really believe that one yourself.

You know as well as we do that Alvarez is gone because of his failure to be able to handle first base properly and your decision that $8 million is too much to pay him in arbitration.

If someone walked up to Huntington in November of 2013 after Alvarez had just led the NL in home runs and hit three out against the Cardinals in the NLDS and said “Hey, Neal! Don’t you think you called up Pedro too early?” He likely would’ve laughed you out of the room and he would’ve been right to do so.

Let’s translate that quote-”I’m saying I called up Pedro too early now so I can frequently reference why I think it’s important to keep Josh Bell in the minors in May.” 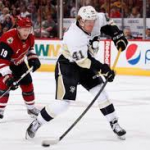 …Pascal Dupuis’ retirement still may not mean very much ice time for Daniel Sprong?!: Yeah. That’s still possible. For a while the argument was that Mike Johnston could find room for Sprong to play because there were too many veterans making too much money on the wings to scratch.

Now GM Jim Rutherford has publicly demanded that Sprong play. But on what line and how often? That’s still up to Johnston. And he may just plop Sprong on the 4th line and elevate Sergei Plotnikov and Beau Bennett as Pascal Dupuis sadly moves onto LTIR.

Maybe Sprong winds up on the third line with Nick Bonino and Patric Hornqvist. That would free up Bennett to play with Sidney Crosby and Chris Kunitz. But does that even really give Sprong’s offensive skill enough potential to shine?

I don’t think so. I’d prefer to see him play on Crosby’s left side with Kunitz on the third line. But we’ve already seen one of Sid’s wubbies retire. My bet is he’d be damned before allowing the other to be moved away. 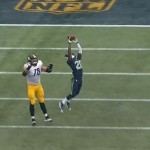 …10-6 may not be enough for the Steelers to get into the AFC Playoffs?!: I never thought we’d see the day when that would be the case in this mediocre AFC. But that may be the case now.

Kansas City will be favored in each of its remaining four games. Don’t be stunned if the Chiefs finish 11-5. Even if they are 10-6, they have a head to head tiebreaker over Pittsburgh.

The Jets are better than their next two opponents (Tenn/Dal). But they may lose their last two against New England and Buffalo. Don’t bet the house on it though.

If the Steelers split their next two games against likely division winners Cincinnati and Denver and then beat the lowly Ravens and Browns, that still may not be enough to get in as the sixth seed if New York’s only remaining loss should somehow be Dallas…or if they get into a complicated three way tie breakers with the Jets and KC.

…the awful Colts team Pittsburgh just beat by five touchdowns may make the post season while the Steelers may stay home?!: Indeed. How would that feel?

Yet, that’s how bad the AFC South is. The Colts can still win that division. Houston is also 6-6. And the teams play head to head in Houston two weeks from now (with Indy having won the first match up). Both clubs get a chance to beat up the Jaguars and Titans. And Miami is the toughest remaining opponent for the Colts. But Houston still has to play New England next week. So, advantage Indianapolis.

…the NFC EAST is even worse than the AFC SOUTH?!: That is also true. No one in that division is above .500. And the East’s “hottest” team (Washington) just lost in a putrid Monday night stink fest to Dallas (without Tony Romo). The division is so bad, not only does it make the AFC South look good, it makes last year’s NFC South look good. And Carolina made the playoffs emerging from that motley bunch with a 7-8-1 record. No doubt this year’s representative from the East will be less deserving than that Panther crew.

…even if the Steelers do scrape into the playoffs, they may wind up having to play in New England in the first round?!: Unfortunately, that’s possible. If somehow the Steelers do battle their way in as the sixth seed in the AFC, their reward may be a trip to their house of horrors in Foxboro. The Patriots have currently sunk behind Cincy and Denver in the conference standings.

But, the Steelers would likely have to deal either the Bengals or Broncos (or both) a loss to get in. And a big part of Pittsburgh surviving may hinge on the Pats getting that road win at the Jets on 12/27. Plus Denver and Cincinnati play one another in three weeks.

So the math on this is thankfully remote. But after back-to-back Patriots losses, their chances of becoming the third seed seems a lot more likely now. Bring some flash cards if the headsets don’t work again this time, coach Tomlin

…only 58K showed up at Heinz Field for the Sunday night game?!: Perhaps the attendance issues seen in other NFL stadiums in recent years are creeping into Pittsburgh. Yes, all the tickets were sold. But still, approximately 10-thousand no shows for an important prime time game on a very temperate December evening? And the secondary market reportedly saw re-sale values as low as $35. Other recent night games in December and against the Colts last year were all in the 61-64 thousand range. Something is wrong there. 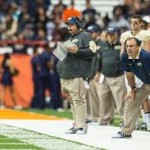 …Pat Narduzzi may not be here for the long run after all?!: Who didn’t see this coming? Well, aside from Pitt fans who talk themselves into thinking every coach they get is “going to be different this time.”

A recent report said that Narduzzi “was supposed to be interested” in the Rutgers job “for the right price.”

That’s pretty open ended. “Right price” could apply to any job. And maybe we shouldn’t believe NJ.com. Perhaps their information was bad. But based on how Todd Graham and Paul Chryst recently jumped ship for greener pastures, why should we assume Narduzzi wouldn’t do the same thing.

And if it’s true…considering leaving for Rutgers? Rutgers?! That would’ve been a bad look for Pitt. Luckily for Panther fans they’ll never have to find out for sure because former Ohio State assistant Chris Ash took the job.

…a “Point Break” remake is coming to theatres?!: Please, no. You don’t redesign the Sistine Chapel. You don’t turn Big Ben into a digital clock. And you don’t remake a cult classic like Point Break. Will Johnny Utah play beach volleyball instead of sand football this time? Does one of the robbers wear an Obama mask or a G. W. Bush mask in the new one? Is there another “50 year storm” already?! Another Anthony Keidis cameo?!

Vaya con Dios, original Point Break. There should never be another!

Benz is horrible isn’t he. Never realized how bad he was till he came here.

So you are trying to tell me that… Narduzzi signed an extension with Pitt?!

Two quotes from Billy Madison come to mind everytime I read a Benz article: “I think he’s retarded or something” and “everyone in this room is now dumber, for having listened” to him. The Narduzzi to Rutgers one was probably the funniest

so many possibly, maybe’s, perhaps, wishy washy words. Benz can you tell me where the pirates would be without Cervelli right now? Reese is still 2-3 years away, and as Biertemple is reporting, the desire to hold on to Diaz could be a good indication that Cervelli wants to hit FA. and if he does, you cool with Tony Sanchez being your starter?

Wow. You really don’t have a clue when it comes to anything. Baseball, Pitt, on and on. So so bad. Everybody should become a columnist or radio host. So embarrassing I almost feel bad. And the Pitt thing put it over the top. He was never leaving. Try following stuff other than sports