Stapleton to return to the practice field in 7-10 days? 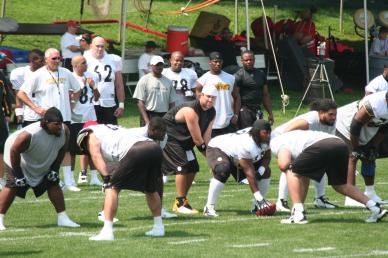 STAPLETON SAYS HE’LL RETURN SOON
Darnell Stapleton is frustrated about the knee injury that’s kept him sidelined for nearly two weeks. But on the bright side, he’s hoping to be back on the practice field “in another week or so.
“I just had some lose bodies in there floating around that were causing (my knee) to flare up,” said Stapleton, a center/guard. “It was restricting my motion so I had to get it scoped and cleaned out. Hopefully, in another week or so, I’ll be back out there.
“I’m just doing some rehab right now to get better. There’s no doubt in my mind that I can come back and play this season.”
Last year in his second pro season, Stapleton wound up starting in Week 5 at right guard after Kendall Simmons suffered a tear of his Achilles tendon.
At the start of training camp this year, he was playing first-team center because Justin Hartwig was out with a toe injury.
Now, Hartwig is back and Trai Essex has been playing right guard with the first-team offense since the start of training camp. So Stapleton isn’t sure what position he’ll be playing when he returns.
“It’s frustrating,” he said. “We had a great season last year and you want to come back and be with your guys, and be in camp and build as a unit. But stuff happens some time and you just have to fight through it.”