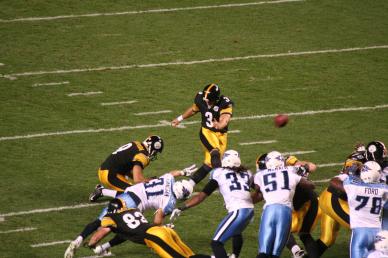 By Dale Grdnic
PITTSBURGH — If first impressions are to be trusted, and there’s no reason to believe they aren’t, the Pittsburgh Steelers should develop into a team that’s good enough to win the AFC North Division and make the playoffs.
And if they’re playing well at the end of the season, they should have as good a chance as any team to run the table to a seventh Super Bowl title.
Now, how well the Steelers play between their 13-10 opening-game win against the Tennessee Titans yesterday and the playoffs is another story.
“I’ll be to the point,” Steelers coach Mike Tomlin said. “Coming into this game, we talked about things that we needed to do to be successful. … We talked about winning the trench warfare, and we didn’t do that.
“I thought we had to take care of the football and win the turnover battle, and we didn’t do that. … We talked about out-hitting them, (and) the jury’s still out on that. We talked about not riding the emotional roller coaster and being prepared to play 60-plus minutes of football. And we did that.”
There was a lot to like, such as the defense’s staunch play on several Tennessee possessions early in the game and midway through the third quarter. And then there’s quarterback Ben Roethlisberger bringing the club back twice.
Once at the end of regulation, only to have a Hines Ward fumble at the 4 thwart the winning shot. But in overtime, Roethlisberger wouldn’t be denied.
Roethlisberger led the Steelers on a 10-play, 63-yard drive in 4:32 to get to the 15 with first-down passes to Ward and Santonio Holmes for 11 yards each and rookie Mike Wallace — who played ahead of Limas Sweed — for 22 to set up Jeff Reed’s 33-yard game-winning field goal at 10:28 left in overtime.
“When the rubber meets the road, Ben is at his best,” Tomlin said. “In those moments, he sees it with great clarity. And he provided quality plays for us time and time again.”
However, despite Roethlisberger’s late-game and overtime heroics — he finished with 33-for-43 passing for 363 yards, one touchdown, two interceptions and four sacks — the Steelers’ offense could not take advantage of good field position on several occasions. And that’s a bit worrisome.
On their second series in the second half, the Steelers got eight yards on first down with a Willie Parker run.
But with no hammer to complete the short-yardage, they gained one yard in two plays and had to punt from just inside the Titans’ territory.
Then, there was the second-and-two call from the 10. Two pounds into the line by Mewelde Moore netted one yard, and the Steelers were forced to kick a game-tying 32-yard field goal. Terrible. Just pitiful.
Where’s Isaac Redman when you need him. Oh, he’s on the practice squad, while Tank Summers was on the bench. He was active, but did not get any carries.
So, the Steelers’ running game apparently has not improved at all from last season. The offensive line certainly doesn’t block any better than it did last season when the Steelers averaged less than four yards per run, and backs Parker and Rashard Mendenhall had little to no jump at all.
Parker had 13 carries for 19 yards with a long run for eight. Moore had five for eight, while Mendenhall added four for six yards. The Steelers had 36 yards on 23 carries, while Tennessee — thanks to a 32-yard run by Chris Johnson — had 86 on 25 runs. But clearly, neither team did much on the ground.
“When you get an opportunity, we felt like this was a privilege to come up here and have a chance to open the season against the world champs,” Titans coach Jeff Fisher said. “When that happens, you’ve got to play well.
“And you’ve got to take care of the little things. And we did not do that. We had our chances and opportunities, but we had a missed field goal and a blocked field goal. We had some opportunities, but it didn’t happen.”
Sure, the holes weren’t there, but Parker made several poor reads, jumping outside too soon and generally not following the blocks when they were there.
Mendenhall looks less and less like the club made a good choice by making him their No. 1 draft pick in 2008. This is an area that must improve for the Steelers to be successful this season.
Until then, the club must rely on Roethlisberger. That’s not a bad thing, but Big Ben has been known to miss a few here and there as well.
Like in the first quarter when he missed Mike Wallace running free in the middle of the field. The poor throw possibly cost the team a touchdown there. And good field position was wasted.
Then, on the second series, the Steelers at least were in field-goal range, but Roethlisberger took a 19-yard sack to quickly take them out of it.
Sure, the blocking was horrendous, and he slipped what would have been a short sack. But instead of getting rid of the ball, he took an even worse sack. I know he’s just trying to make a play, but the correct one there was to get rid of the ball once he got away from the initial pressure.
Sure, Roethlisberger drove the Steelers to the 10 with a chance to win the game with about three minutes remaining, but then Tomlin took the ball out of his hands. After precise passes to Santonio Holmes and Heath Miller, the Steelers tried to run the ball and couldn’t get it done.
In retrospect, a pass into the end zone to win the game — which someone once said is why you play the game — would have been more prudent.
And handcuffing Roethlisberger is never a good idea. He was 28-for-36 for 303 yards and one touchdown with two interceptions in regulation and won the game in overtime.