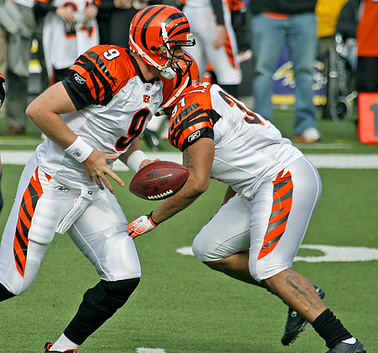 By Dale Grdnic
PITTSBURGH — If there tends to be laughter when the Cincinnati Bengals are mentioned in conversation, one can understand why with a quick history lesson.
The Bengals, the defending AFC North Division champions, are just 2-5 this season and have quickly dropped three games off the pace set by the Pittsburgh Steelers and Baltimore Ravens. The Steelers (5-2) face the Bengals Monday at 8:30 p.m. at Paul Brown Stadium in Cincinnati, Ohio.
But current issues aren’t the lone reason why the Cincinnati franchise has been a laughing stock to many. Not Cleveland Browns-like, by any means, but the Bengals haven’t won an NFL playoff game since 1991 when they defeated the Houston Oilers in an AFC Wild-Card game. They are 5-9 in the playoffs since 1970 with two Super Bowl losses and usually fall apart after a good year.
Cincinnati swept the Steelers and won the AFC North last season and are pitiful this year. The same occurred after the 2005 campaign, after the Steelers beat Cincinnati in an AFC Wild-Card game. The Bengals went 8-8, 7-9 and 4-11 before the huge turnaround last season. However, since Cincy went to the Super Bowl in 1988, it has had just three winning seasons.
“I never really thought about it,” Steelers strong safety Troy Polamalu said. “I didn’t have any expectations about any team in our division, except us, going into this season. But we don’t worry about their record, because this is a division game, and every one is important.”
Another reason to not consider the Bengals anything but laughable is that they not only considered, but eventually signed wideout Terrell Owens to a roster that already included a loud-mouthed, underachieving receiver in Chad Johnson.
Actually, Owens has achieved much more in his career than Ochocinco, but he’s still a coach-killing, locker-room cancer.
But they still have to be dealt with by an opposing defense.
“This might be the most talented receiver corps that we’ll face all year,” Polamalu said. “No. 11, the rookie (Jordan Shipley), is really talented. And their top two guys are among the best.
“Whenever you can get an offense to pass, force them to pass, it’s a huge advantage for the defense. But when you have those types of receivers, of course, you want to throw the ball as much as possible.”
Steelers cornerback Bryant McFadden believed last week’s game against the Saints actually was a good dress rehearsal for pass-happy Cincy, and the Bengals are even more dangerous on offense than past years.
“They have another weapon that we need to prepare for in T.O., an up-and-coming tight end and Shipley, so they just added more bullets to the gun,” McFadden said. “Most of their games, they’ve moved the ball exceptionally well on offense.
“And they’ve scored 30-plus points with (a lot) of yards. So, they’ve been moving the ball on offense, but I don’t know about their defense and wins and losses. The way that they’ve moved the ball, you wouldn’t think they were 2-5, but that’s how it goes sometimes.”
Cincinnati also has running back Cedric Benson to rely on, but teams generally haven’t fared to well running the ball against the Steelers. That means Bengals quarterback Carson Palmer probably will take to the air more often than not.
“You’ve just got to keep grinding,” Palmer said. “They are great at what they do defensively, but they’re especially good at stopping the run for a reason. They pride themselves on that, and we pride ourselves on running the football. We’re two good football teams and two good run defenses.
“You can’t have 3-4 carries for 3-4 yards and (think) you can’t run it. You’ve got to stick to it. You’re not going to rip off a 30-yarder here or a 25-yarder there. You’ve got to hope for two or three here and then six and eight there. Hopefully, you can get that and just stick with it all game long.”
The Bengals actually have still been competitive this season, as all four of their losses have been by eight points or less, and they had a second-half lead in three of those. That makes this game a must-win situation.
“It’s a big game for us,” Bengals coach Marvin Lewis said. “It really is, and obviously to have an opportunity to either still be in the division race or the playoff race down the line, we are killing ourselves.
“So we have to get back to winning football games. We let some games slip in the last four weeks so we have to do a much better job, get a good start, play consistently through the mid-point of the game and then finish at the end.”
Steelers quarterback Ben Roethlisberger was contained between the tackles, for the most part by New Orleans last week, so one might think the Bengals would attempt to do that. But Cincy has just six sacks so far and has been fairly porous on defense this season.
“(Teams) are a little bit trying to rush wide and keep me inside,” Roethlisberger said, (but) that’s fine. We’ll take that (and) just stay in the pocket and throw the ball. Teams always try to come after us. We know that.
“We just have to be prepared for it, and last week I don’t think we were as prepared for it as we normally have been. That’s something where we had an off game and hopefully that doesn’t happen (in Cincinnati).”
One reason to not look past the Bengals is that they could come up with their best game this season, considering they basically will be done with a loss at the season’s midpoint. So, Cincinnati put forth its best effort, which likely will be needed to beat the Steelers.