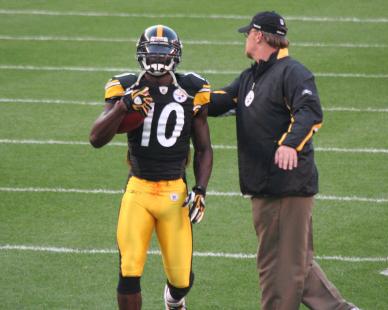 By Dale Grdnic
PITTSBURGH — For those Pittsburgh Steelers interviewed Monday after their final team meeting with Coach Mike Tomlin, there were various reasons the club followed a Super Bowl season with an underwhelming, 9-7 non-playoff year.
However, one aspect rang true from center Justin Hartwig, wideout Santonio Holmes, outside linebacker LaMarr Woodley and inside linebacker James Farrior. The Steelers were competitive with every team on their schedule, but they just weren’t able to finish games. Five times, the club lost fourth-quarter leads.
“I really can’t put my finger on everything that went wrong,” Hartwig said. “All the games were so close, and that’s something that I’ve noticed since I’ve been with this team. All those games that we won last year, those close games, we didn’t win those this year.
“And I think that was the difference. We didn’t finish the games. I don’t think you can put your finger on one thing or that there was one guy or if we would have done one thing better then we would have had a better record. It’s hard to do that, but as a team we just didn’t finish games the way that we did last year.
“Some people might say that with a couple things happening differently, we would have been 7-9, but I look at it that if we win one more of those games we’re in the playoffs right now,” Hartwig added. “I think our team is capable of beating anybody. Certainly, we have the personnel to do that. But things didn’t fall our way this year.”
One might believe the Steelers’ defense, which nearly was No. 1 in every category in 2008-09, was hampered with end Aaron Smith and safety Troy Polamalu missing the majority of the games with injuries. Farrior agreed.
“It definitely was a disappointing year for our defense as a group,” Farrior said. “We definitely feel like we didn’t do a lot of things well at the end of the games, and we cost our team those games. We didn’t play as well as we could have plays, and there were plays that we left on the field that cost us games.
“And with Aaron Smith and Troy out, those basically are our best two players on defense. So, having those two guys out really affected us. It was tough on us, not having those two impact players out there. And it really affected us in the way that we played.”
Woodley had a somewhat different viewpoint.
“I think we were still in a position to win games without those two guys in there,” Woodley said. “Troy wasn’t in there, so we weren’t getting as many turnovers, but we still had opportunities. In a lot of the games that we lost, we had the lead. And we allowed teams to go into that fourth quarter and put points up on us.
“So, we were in the games, but we just didn’t close them out. … Those are veteran guys, guys with experience, and with guys like that they can communicate. Aaron does that. He knows what’s coming. Troy confuses an opposing offense. (But) I feel like guys stepped up this year and did a great job.
“It’s just that we didn’t close out the games,” Woodley added. “We gave up the big pass play. We didn’t put pressure on the quarterback, and we didn’t do a good job wrapping up on tackles. We had the games won, but we just didn’t get the job done at the end.”
While the Steelers primarily have been known as a defensive team the past four decades, that wasn’t the case this season with 4,000-yard passer Ben Roethlisberger, 1,000-yard rusher Rashard Mendenhall and 1,000-yard receivers Holmes and Hines Ward. Holmes and Ward were joined by tight end Heath Miller as a trio with more than 70 catches and five touchdowns each.
“That’s the perception that everybody wants from our team is that our defense is what holds our team together,” Holmes said. “But when you have weapons on offense such as myself, Hines Ward, Heath Miller, Mike Wallace, Rashard (Mendenhall) and Ben (Roethlisberger), you have to allow your playmakers to make plays.
“This year we focused a lot on our offense getting much better. It was proven this year that we’ve gotten better. (So), the product we produced, I think, was better on the offensive side. … We didn’t produce enough points this season to win ball games.
“And it put our defense in a bind at times this season,” That’s going to be our focus next year on how well we continue to score touchdowns when we get in the red zone.”
All four Steelers, the two on offense and two on defense, believed their respective coordinators — Bruce Arians and Dick Lebeau — would return next season. While they didn’t talk to either extensively, the players believed that Arians would be retained and Lebeau would not retire.
As for player moves, neither player believed the roster would be overhauled and just regular attrition, cuts and free-agency movement would occur.
Steelers coach Mike Tomlin will hold his final press conference Tuesday at noon.