Steelers – Friday: Matching up against 49ers 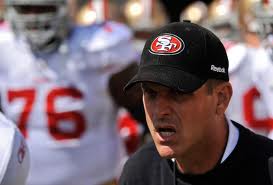 By Dale Grdnic
PITTSBURGH — When this year’s NFL schedules were released, few believed the San Francisco 49ers would provide the Pittsburgh Steelers with any resistance when the two were scheduled to play on a Monday night in December.
The 49ers were coming off a 6-10 campaign in 2010 and had a new coach, former NFL quarterback and Stanford head coach Jim Harbaugh. With that Steelers-Niners matchup Monday night at 8:30 at Candlestick Park in San Francisco, Calif., both teams are 10-3 and battling for playoff seeding in their respective conferences.
In an interesting note, John Harbaugh, Jim’s older brother, has his Baltimore Ravens team also chugging along with a 10-3 record. Since the Ravens have beaten the Steelers twice this season, the two conceivably could have shared information on the Niners’ opponent this week.
“It’s a great testimony to those guys and their teams, but the best coach in the family is their dad,” Steelers defensive coordinator Dick LeBeau said. “So, I’m going to look over there during the game to see if he’s on the sideline.
“(But) Jim Harbaugh has done an excellent job with the 49ers and especially quarterback Alex Smith. The offense that he runs really suits Smith and the way he plays. The other players are well-suited to what Harbaugh runs as well.”
Gore is the offensive lynchpin for sure with 1,054 rushing yards, 4.5 per carrnd six touchdowns. He also has 16 receptions this season. Smith has completed nearly 62 percent of his passes for more than 2,500 yards and 15 touchdowns with just five interceptions.
Wideout Michael Crabtree and tight end Vernon Davis are far and away the top receivers with 55 and 49 catches, respectively. Davis leads with five touchdown catches, while backup tight end Delanie Walker has 19 catches and three scores. Crabtree has two touchdown catches.
The Niners’ two specialists, punter Andy Lee from Pitt and place-kicker David Akers, also are weapons. Lee averages nearly 51 yards per punt, about 44 net, while Akers has made 36 of 42 field goals and all 27 extra points. The Niners might not score many points at less than 24 per game, but they certainly don’t give up much, either, at 14 points allowed per contest.
“They’re really good on defense,” Steelers offensive coordinator Bruce Arians said. “No. 1 in a lot of categories and haven’t allowed a rushing touchdown. Vic’s a great coach (defensive coordinator Fangio). I’ve known him for a long time, and he’s a really good coach. So, he has them playing real well right now.
“They have an extremely good front seven, and their two safeties are playing well. So, they’re a great challenge just running the football on them. Their safeties are in the box a lot, and in the red zone they play a very good style of Cover 2. But they stop the run especially well in that part of the field.”
It will be an especially difficult task for the Steelers’ offense with quarterback Ben Roethlisberger and center Maurkice Pouncey unlikely to play. Both have been rehabbing their left high-ankle sprains all week. Roethlisberger practiced on a limited basis today, while Pouncey has yet to practice this week.
As of now, veteran Charlie Batch will get the call at quarterback, while Doug Legursky moves to center and veteran Trai Essex slips into the left guard spot.
“Well, the standard is the standard, and we’ve all had to step in for other guys,” Steelers running back Isaac Redman said. “So, Charlie can do it, too. It’s his turn. Last year, when Ben was out, Charlie did a great job. We went 3-1 and could have been undefeated. So, everybody has great confidence in Charlie that he can do the job. And we’re all going to rally behind him if he plays.
“Last week, when he had to come off the bench so fast, that’s not an indication of what he can do. He’s had all week to practice with the first team, and he’s ready to go if he’s needed. But that’s totally different from being on the bench the whole game and having to take your jacket off and play without any reps other than working with the scout team. So, he’ll be ready to go this week.”
Batch is 0-for-2 this season with two sacks in limited play against Seattle, Cincinnati the second time and Cleveland last week.