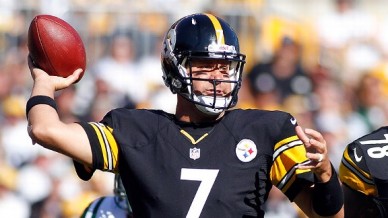 By Dale Grdnic
PITTSBURGH — The New York Jets and Pittsburgh Steelers were missing three starters each due to injuries, but the Steelers were coming off a disappointing loss and the Jets had a resounding victory.
The setting appeared to be primed for a change when the two met Sunday afternoon at Heinz Field, and the Steelers steadily pulled away for a 27-10 win.
“It was an appropriate response to last week’s performance,” Steelers coach Mike Tomlin said. “We talked openly about it this week. That’s what good teams in the National Football League do. They might not always be perfect, but they respond. And our response was a win against a very good football team.”
Both clubs believed the game was decided on third down. The Steelers converted 53 percent on third down (8-for-15), while the Jets were 4-for-12 (33 percent). It didn’t hurt the Steelers that quarterback Ben Roethlisberger was 24-for-31 for 275 yards, two touchdowns and no interceptions with three sacks and a spectacular rating at 125.1
“I felt like the line did a good job of giving me time,” Roethlisberger said. “Guys get open, and they can make defenders miss and make cuts. There are just a lot of options out there, and I like it.”
The Steelers didn’t run the ball too well, 28 yards by Jonathan Dwyer and 25 by Isaac Redman, but they ran hard and helped set up the passing game a bit.
“They might not have had a lot of yards, but they did a good job tonight,” Steelers wideout Emmanuel Sanders said. “They blocked well and ran hard, and they’ll have a big game soon enough.”
Sanders was solid with three catches for 33 yards. Antonio Brown and Mike Wallace led the way with seven and five catches, respectively, for 79 and 74 yards. But it was Wallace’s 37-yard touchdown catch that was the backbreaker against the Jets. Overall, there were 10 different pass-catchers for the Steelers.
“That’s a lot of people,” tight end Heath Miller, who had a touchdown catch, said. “I think that’s just what we had in our offensive rhythm. All the guys that we have are capable of making plays.”
Defensively, the Steelers held the Jets to 219 total yards, including 137 by quarterback Mark Sanchez. He was sacked twice, including one by LaMarr Woodley.
“We tried to put a lot more pressure on Sanchez, and it worked,” Woodley said. “After that, he started getting rid of the ball quicker, and our secondary did a great job of covering.”
The Steelers, who were missing two former defensive players of the year in Troy Polamalu and James Harrison, got great performances all around.
“A key was that No. 25 (Ryan Clark) stopped playing really bad. Period,” Clark said. “I was just excited. I had a lot of emotion. It was my first game since the Cleveland game last year.”
Clark had to sit out the Denver playoff loss last year and Denver opener this year due to his issues with having the Sickle Cell trait.
“Troy wasn’t out there, and I was trying to do a lot,” Clark said. “People kept telling me all week to bring my excitement to the field, but … I guess I was just a little too anxious. … But I stopped being a knucklehead after the early part of the game, and we were able to play some football.”
And that ended up being more than the Jets’ offense could handle on either side of the line.