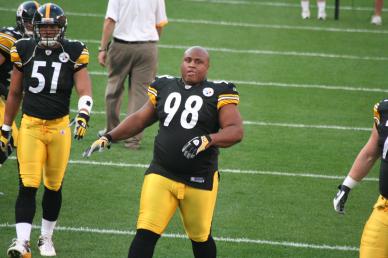 SCOUTING REPORT
STEELERS (2-2) at LIONS (1-3)
1 p.m. at Ford Field (64,500) in Detroit
Playing surface: Field Turf
TV COVERAGE
CBS (locally KDKA-TV, Channel 2)
Dick Enberg, play-by-play; Dan Fouts, analysis
RADIO
Steelers Radio Network (WDVE-FM, 102.5, WBGG-AM, 970; WBVP-AM, 1230, WMBA-AM, 1460)
Bill Hillgrove, play-by-play; Tunch Ilkin, analysis; Craig Wolfley, sideline reporter
TODAY’S ANGLE
The heavily-favored Steelers (2-2) will have a chance to move closer to first place in the AFC North. If they win as expected, they’ll be only one game out of first place. The two teams ahead of them in the division _ the Ravens (3-1) and Bengals (3-1) _ play today in Baltimore.
INJURY REPORT
STEELERS
Running back Willie Parker will miss his second straight game with a turf toe injury. He’ll be replaced by Rashard Mendenhall, who rushed for 165 yardfs last week in a win over San Diego.
Strong safety Troy Polamalu returned to practice on a limited basis this week, but it doesn’t appear his sprained knee has healed to the point where he can play. Officially, Polamalu is listed as doubtful. So look for Tyrone Carter to make his fourth straight start.
Also, rookie tight end David Johnson is listed as questionable. Johnson missed last week’s win over San Diego with a high ankle sprain.
LIONS
The good news for Detroit is that star wide receiver Calvin Johnson will play even though he hardly practiced this week with a thigh injury. He’s listed as probable.
Rookie quarterback Matthew Stafford, the No. 1 overall pick of this year’s NFL Draft, is questionable after twisting his knee last week in a loss in Chicago. But media reports out of the Motor City suggest he won’t play. If Stafford can’t play, 11th-year pro Daunte Culpepper will start.
“I’ll name my quarterback on Sunday,” Lions coach Jim Schwartz said.
Starting right tackle Gosder Cherilus (shoulder) is also listed as questionable, but he’s expected to play. Back-up safeties Kalvin Pearson (quadricep) and Ko Simpson (hamstring) are also questionable.
But two starters _ defensive end Dewayne White (hamstring) and defensive tackle Sammie Lee Hill (ankle) _ are doubtful and will likely sit out.
SERIES HISTORY
In a series that began in 1934, the Lions lead 17-15-1.
The Steelers have an 11-3-1 lead in games played in Pittsburgh, but are only 4-13 in Detroit.
The Lions and Steelers met once in the post-season in the Playoff Bowl. That was a game played from 1960-69 in the Orange Bowl in Miami to determine the third-place team in the NFL. In the 1962 Playoff Bowl, the Lions beat the Steelers, 17-10.
Today’s game marks the Steelers’ first visit to Detroit since Thanksgiving Day in 1998 when they lost in overtime, 19-16.
The last time they played the Lions, the Steelers won 35-21 at Heinz Field on Jan. 1, 2006. The No. 1 star that day was Jerome Bettis, who rushed for three touchdowns in his final home game.
QUOTE OF THE DAY
“I have nothing but respect for that organization. It was definitely a plus. I made some money and I won some Super Bowls. You can’t ask for more than that. It’s a class A organization. They always treated me with respect, but unfortunately, the business side of it happens.”
_ Lions linebacker Larry Foote, who was cut by the Steelers in May after spending his first seven seasons as a pro in Pittsburgh.
BETTING LINE
The Steelers are favored by 10 ½ points
MIKE BIRES PREDICTION
Steelers 31, Lions 17
Detroit may be improved over last year’s team that went 0-16. Still, if Pittsburgh is truly a Super Bowl contender again this year, it should win with ease.