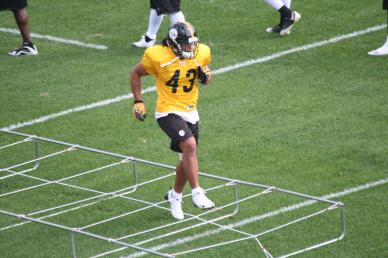 By Mike Bires
There have been at least two media reports saying that Troy Polamalu might play Sunday for the Steelers.
That couldn’t be further than the truth.
In fact, around 1 p.m. Thursday as the Steelers headed to the practice field, Polamalu, the Steelers’ star strong safety, limped into the cafeteria at team headquarters.
There is absolutely no way that Polamalu, who suffered a sprained knee in the Sept. 10 opener against Tennessee, will be able to play Sunday night against the San Diego Chargers.
When Polamalu was hurt, coach Mike Tomlin said Polamalu’s recovery time would be three-to-six weeks.
There is a chance Polamalu will play in the Oct. 11 away game against the Detroit Lions. But a more realistic date may be Oct. 18 when the Steelers host the Cleveland Browns.
Tyrone Carter has started the past two games in place of Polamalu. But cornerback Deshea Townsend has taken plenty of snaps at practice Wednesay and Thursday at safety.
MENDENHALL WILL SEE EXTENSIVE ACTION
For Rashard Mendenhall, what a difference a week makes.
Last week, Mendenhall practiced so poorly that coach Mike Tomlin would not allow him to carry the football in this past Sunday’s 23-20 loss to the Cincinnati Bengals.
But this week, Mendenhall has been practicing well, and, coupled with Willie Parker’s turf toe injury, may start against the Chargers.
Parker missed practiced Wednesday and Thursday.
Offensive coordinator Bruce Arians said that either Mendenhall or third-down back Mewelde Moore will start at running back if Parker is scratched.
“Yes, it was frustrating,” Mendenhall said of his punishment in Cincinnati. “You want to take advantage of your opportunities. You want to prove to the team what you can do. I wasn’t able to do that last week.
“No, I wasn’t upset (with Tomlin). I respect the way he handles things. He addresses it, and that’s the end of it.”
Mendenhall said that he practiced well on Wednesday and Thursday. Arians agreed.
So it’s almost a given that Mendenhall will get more carries than he has in any game so far this year.
He had four against Tennessee, three in Chicago and none in Cincinnati.
“I just look forward to the opportunity to play and show our fans and my teammates what I’m able to do,” said Mendenhall, the Steelers’ first-round pick in the 2008 NFL Draft.
HARTWIG RETURNS TO PRACTICE
After sitting out Wednesday’s practice with a sore ankle, center Justin Hartwig was back Thursday. So he’ll be starting Sunday against the Chargers.
Hartwig was injured at some point in Cincinnati, although he did not miss any snaps.
The only Steelers on the 53-man roster who missed practice Thursday were Polamalu, Parker and rookie tight end David Johnson, who suffered a high ankle sprain in the first quarter Sunday.
STEELERS WILL WEAR THROWBACKS; SOME WILL WEAR PINK, TOO
The Steelers will bring out their throwback uniforms Sunday night. But some of them will wear pink as well.
In conjunction with Breast Cancer Awareness Month, several players will wear pink cleats, wristbands or gloves.
Among them is quarterback Ben Roethlisberger.
“You know, I’m not afraid to be made fun of for wearing pink,” Roethlisberger said. “When it’s for a good cause like this, to raise awareness for such a vicious disease, I’m all for it.”
Steelers expected to wear some pink include Roethlisberger, Parker, wide receivers Santonio Holmes and Hines Ward, linebacker Lawrence Timmons and free safety Ryan Clark.
“Hot pink … that really isn’t the look. But it’s for a good cause,” said wide receiver Hines Ward, who wore his pinks cleats Wednesday at practice. “It’s great that players throughout the National Football League are showing their support.”
Several Chargers are also expected to wear some pink Sunday night, including quarterback Philip Rivers.
As far as wearing their throwback uniforms, tackle Max Starks said, “That’s cool.”
Starks likes the uniforms designed after uniforms the Steelers wore in the 1940s, ‘50s and early ‘60s.
The throwbacks feature yellow helmets, black jerseys with yellow numerals and white pants.
“They’re our third uniform,” Starks said.
The Steelers 3-1 since their throwbacks debut two years ago during their 75th anniversary season. They were 2-0 in them in 2007 with wins over the Buffalo Bills and Baltimore Ravens. They were 1-1 in the throwback last year with another win over the Ravens but a loss to the New York Giants.