Steelers – Thursday: Ben will have to show something in tomorrow’s walk-through to play vs Rams 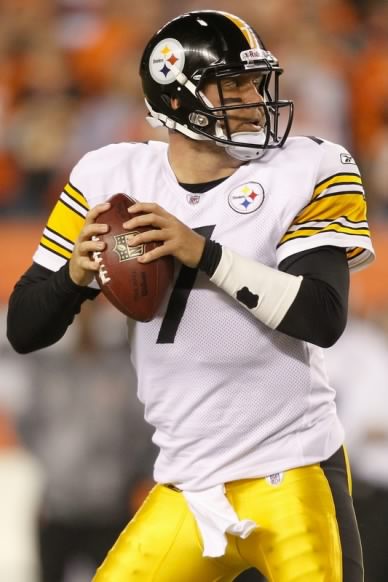 By Dale Grdnic
PITTSBURGH — To play or not to play, that’s the question for several Pittsburgh Steelers going into their final two regular-season games against the St. Louis Rams Saturday at 1 p.m. at Heinz Field and Cleveland Browns Jan. 1, 2012 on the road at Browns Stadium in Cleveland, Ohio.
Quarterback Ben Roethlisberger, center Maurkice Pouncey, wideout Emmanuel Sanders, running back Mewelde Moore, strong safety Troy Polamalu and outside linebacker LaMarr Woodley have all been banged up going into the homestretch. And some believe all or most of that group should rest for the playoffs.
Neither Roethlisberger nor Pouncey practiced Thursday afternoon, so both have to be considered questionable for the game Saturday. The only workout left is a walkthrough Friday morning.
“There’s no need to lobby, because we all make decisions here together,” Steelers offensive coordinator Bruce Arians said.
“So, we’ll discuss it, and we’ll see how Ben does (Friday). But we have a game plan ready for both Ben and Charlie, so there’s no problem there. We’re playing for a bye and a lot of things.
“So, no, there’s no reason to rest a guy for the playoffs. We went to the 11th hour with Charlie last week. We have confidence in Charlie. I haven’t seen Ben do anything other than walk around the building. Last week, I saw him do some things on Saturday that surprised me. That plane ride didn’t help us, though.”
Pouncey, Arians noted, should be considered the same status as Roethlisberger. But he added that Pouncey did not make the trip to San Francisco just so his foot wouldn’t swell during the long plane ride. Pouncey said even if he has one chance in a million to play, at least there’s a chance. He probably shouldn’t be believed at this point.
“I practiced a little bit the other day (Wednesday), but I didn’t do anything today,” Pouncey said. “I guess Coach Tomlin will have to tell you whether or not I’m going to play. It’s getting frustrating, for sure.
“And, of course, I want to play. I’m a competitor, so the worst thing is for me to not be able to practice and not know whether or not I’ll be playing. But it’s getting better every day, so we’ll see.” 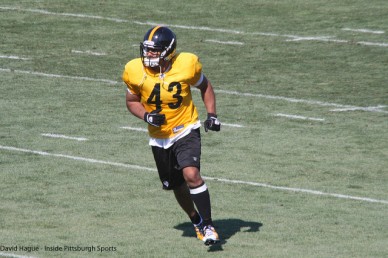 Don’t count Polamalu among those who believe the Steelers should look ahead and not worry too much about these final two regular-season games. Polamalu has taken part in a full practice on both days.
“I don’t think there’s ever any formal discussion about resting for the playoffs or getting ready for the playoffs, because we still have two regular-season games to play,” Polamalu said. “The St. Louis Rams are the next team on our schedule, and that’s all we’re concerned about right now.
“We haven’t even talked about the playoffs. Like I’ve said, there are two regular-season games left, and there’s no way we’re looking ahead to anything but the next game. We want to be playing as well as possible going into the playoffs, so the best way to do that is to prepare for each game separately.”
Steelers wideout Hines Ward, who could be playing in his final game at Heinz Field, believed there was a lot to play for this season.
“We’ve got a chance to finish strong at home and finish at 7-1,” Ward said. “That’s something we take pride in. We want to win all our games at home and let our opponents know that playing at Heinz Field is a tough place to play at. We’d like to stay home for the playoffs, but the way things happened it looks like we’re going to have to go on the road and do things the hard way.
“It’s tough to win on the road in this league, everybody knows that, but we’ve done it before and we believe we can do it again. It’s also nice to be at home for Christmas Eve and be able to spend time afterward with our families. People on vacation come home, kids during school holidays, so it’s always a special time to play a home game around this time. And I’m looking forward to it.”
Moore (left knee) and cornerback Curtis Brown (right knee) did not practice either day. Moore already has been ruled out by Tomlin. Linebacker Chris Carter (hamstring), Sanders (right foot) and Woodley (hamstring) were listed as limited on the practice report Thursday.
Sanders stayed on the field late to get some additional work, but Arians said he probably should get more practice time in order to get in a game. Let’s just say that Woodley was extremely limited and spent the majority of Thursday’s practice time in the weight room.