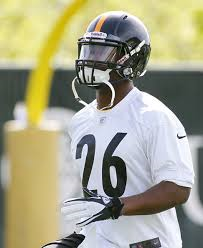 By Dale Grdnic
LATROBE, Pa. — Second-round pick Le’Veon Bell will get first-team reps at running back, according to Pittsburgh Steelers coach Mike Tomlin, when the club plays host to the New York Giants in the opening preseason game Saturday night at 7:30 at Heinz Field.
“All the healthy bodies will participate in the game,” Tomlin said Thursday morning. “We anticipate playing our first units 10-12 snaps or so. (And) don’t be surprised if you see Le’Veon getting some snaps with those guys.
“I think he’s earned that. But don’t be surprised to see him play after those guys are out of the game as well. He, like a lot of guys, we need to get a lot of exposure to, and I’m sure that’s probably who you want to know about.”
Tomlin added that all four quarterbacks will play, but he and the coaching staff have not determined a running back rotation. Isaac Redman and Jonathan Dwyer, who are battling Bell to be the starting running back, have taken the competition and the rookie’s success in stride.
“They’re responding to it the way professionals should, and they’re competing,” Tomlin said. “It’s bringing out the best of them.”
Tomlin noted that the return game will be handled by the younger players.
“We know what Antonio Brown is capable of, Emmanuel Sanders and LaRod Stephens-Howling,” Tomlin said. “We want to see some of the other guys, whether it’s (Kashif) Moore, (Reggie) Dunn or any of the others. We’re going to feature those guys in the return game. But we’re excited about this.”
Tomlin noted that while he had not yet discussed playing time with all four kickers, he generally has given each one a half to be the place-kicker and punter. The starter has not yet been determined, either.
Among the heavy secondary shuffling, expect to see rookie fourth-round pick Shamarko Thomas get reps as the nickel cornerback, as well as his regular backup safety spots.
“He’s done a nice job and oftentimes you can tell his growth and development just simply by his willingness or ability to communicate in walking-like settings, the work that we do in the a.m.,” Tomlin said. “Day by day, you hear him more verbal in communication and that is a big part of that position. It is kind of the hub of communication. It is package football. He is embracing that.
“We will continue to put it on his plate and see if he can execute in a game-like setting situation. We have been pleased with that. I just think he adds value to himself the more he’s capable of doing. Obviously, he has a physical skill set that’s geared toward that flexibility, and we’re not going to take it for granted.”
Tomlin did not have updates on any injured players like tight end Matt Spaeth (right knee, foot) and cornerback Curtis Brown (left hamstring, ankle). The two were being evaluated in Pittsburgh Thursday morning.