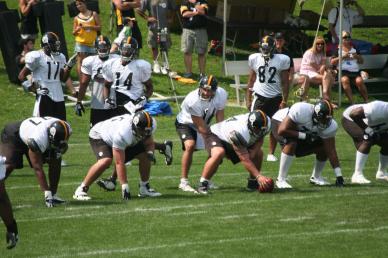 By Mike Bires
LATROBE _ On Saturday, the Steelers finally fielded an offensive line that’s likely to start the season opener on Sept. 10.
The big news at practice was center Justin Hartwig taking part in an entire training camp practice for the first time this summer.
Coach Mike Tomlin went as far as saying that Hartwig will start Saturday when the Steelers play their second preseason game against the Washington Redskins in Landover, MD.
Hartwig has been held out of most camp drills due to an ndisclosed toe injury. He didn’t play in Thursday’s exhibition win over the Arizona Cardinals.
“No, we are not concerned about a reoccurrence whatsoever,” Tomlin said. “I think that’s why we took the approach we took with it in terms of crawling him back because we want to leave it behind us and I think we are in position to do that.”
Hartwig, the Steelers’ starting center last year, added that “I’ve been reassured by our doctors that it is not going to get worse, and that’s all I was waiting for, a green light that it’s good enough to continue to heal from this point on,” Hartwig said. “It’s healed enough where it’s not going to get any worse. It’s just a matter of dealing with pain until it’s completely healed.”
Hartwig was injured at some point during the off-season.
EMPHASIS ON PASSING GAME
The Steelers’ offense spent a lot of time throwing the football in the two 11-on-11 team periods Saturday. Tight end Heath Miller had an especially busy afternoon.
At one point, wide receiver Hines Ward dropped a touchdown pass from quarterback Ben Roethlisberger. Moments later, however, Ward caught a TD pass from “Big Ben.”
After his touchdown, Ward tossed the football into a crowd watching from the hillside surrounding the athletic fields at St. Vincent College. But after a male adult wound up with the football, he was jeered by other fans.
“Hines was throwing it to the kid wearing the No. 86 jersey!” yelled one fan. The man with the ball reacted accordingly and gave it to a girl wearing a Ward replica jersey.
HOT DAY IN LATROBE
Saturday may have been the hottest day of camp so far this year.
At one point the temperature reached 91 degrees. Combined with the high humidity, the heat index was 99.
MORE INJURY NEWS
Mendenhall sat out Saturday’s practice with a thigh contusion. He’s expected back today.
But for running back Mewelde Moore, the news wasn’t as encouraging. He continues to be sidelined with a hamstring pull.
Wide receivers Martin Nance and Tyler Grisham have also been bothered with hamstring injuries. Nance at least took part in some drills Saturday.
Brandon Williams, also a wide receiver, missed another practice with an abdominal strain.
Meanwhile, running back Willie Parker returned to practice after sitting out most of last week, the preseason game included, with back spasms.
Likewise, defensive Brett Keisel also practiced. He missed the pre-season win over Arizona with a calf injury. He was accidently kicked during a walk-through workout on Wednesday.
UPON FURTHER REVIEW
After watching the videotape of the win over Arizona, Tomlin said he wasn’t happy with the penalties called against the Steelers.
“One of the things I’m going to talk to the guys about is part of being a good team, part of being a tough team, and not beating ourselves,” Tomlin said. “We had seven penalties for 70 yards. We were penalized too much a year ago. We’d like to play smarter.
“I think we pride ourselves in playing the physical brand of football, but we need to play smarter. I understand that penalties like 12 men in a huddle, delay of game (by our offense) and things of that nature come with your first time out. But we need to make those problems disappear and disappear forever and that will be our focus this week. We need to get better in that regard.”