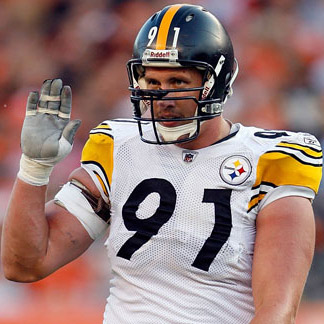 By Dale Grdnic
PITTSBURGH — It does not appear that defensive end Aaron Smith will play when the Pittsburgh Steelers face the Baltimore Ravens Saturday at 4:30 p.m. at Heinz Field.
Steelers coach Mike Tomlin said that Smith will have a scan this week, and that MRI has been scheduled for Friday. It’s unlikely that Smith will go through more than just a light workout before results from that scan are known, so it’s unlikely that he’ll practice this week, let alone play against the Ravens.
“It would be nice to be able to play in these next couple games and get things going again,” Smith said Tuesday after practice. “It doesn’t matter who I play against, because I’ve been playing football for so long that I think I’ll get right back into it and just do what I know. … I’ve tried to be optimistic.
“(And) I’ve also had some pessimism, too, the past couple months. Neither has worked so far, I guess, so I’m just trying…
to take things day by day. And we’ll see what happens Friday. I just have to stay mentally sharp, so I’m ready when I get the call, and it was nice to be out there with the guys.”
Smith has been lifting weights for nearly a month now, and he’s had several MRIs to gauge the “maturing process of the injury and how well it’s healed.” But his status is totally based on what the doctors say after reading the scans.
“Lifting weights to determine my strength is just a relative term,” Smith said. “How much weight is the right amount of weight? As far as the healing process, that’s the best factor. But I’m in great shape. I’m probably in better shape now than when I got hurt. I guess I’m not in football shape.
“There’s one thing, I don’t have to worry about my cardio, my conditioning. So, I’m just taking it day by day, and we’ll see what the doctor’s say. The next scan is scheduled for Friday, and I wanted it moved up to there. I haven’t had one yet this week, so we’ll see where I am on Friday.”
Smith, who suffered a right triceps injury Oct. 24 at Miami, joined safety Troy Polamalu (right lower leg) and cornerback Bryant McFadden (abdomen) on the sideline for the majority of Tuesday’s practice. Both McFadden and Polamalu are expected to practice Thursday and play against the Ravens.
“I feel all right,” McFadden said. “I practiced some today, and I’ll try to get a little more work in (Wednesday). But it’s more mental reps, so I kind of relaxed my way into it. It looks like I’m shooting for Thursday, which is like a Friday, and as long as I don’t have any setbacks I’ll be all right for the game.
“That’s why I’m not in a rush to get back into a heavy practice schedule. I don’t want something to happen, and then there’s no chance that I’ll play. I’m having abdominal trouble, so it’s real sore and tough to move around. So, if I take it easy and loosen it up I think it’s going to be better for me.”
Notes and Quotes
Veteran wideout Hines Ward has mentored young teammates Mike Wallace, a second-year receiver, and rookies Antonio Brown and Emmanuel Sanders throughout this season. However, Ward has been especially vocal to the trio as the trio approaches their initial playoff tournament.
“Hines told me a lot about the playoffs,” Wallace said, “and you know him. He likes to tell stories, so you know any message from him is going to be long. He told me about the intensity, the speed and the focus during the playoffs and what it’s going to take to be successful.
“So, you have to take it for what it is and take out of it all the good parts, because you know going in that it’s going to be real long. He’ll repeat things three or four times, it might be over an hour or two, but he had a lot of good things to say. It just takes him a long time to say it.”
Ward’s response to the same question was lengthy, but when asked what he expected from Wallace in the post-season he was quite succinct.
“I look for Mike to have a huge playoffs this season and have some big ball games,” Ward said.
A Look To The Future
Early Tuesday, the Steelers announced that they signed six players to Reserve-Future contracts for the 2011 season, but they are not eligible to practice with any team until this spring.
The future Steelers were linebackers Baraka Atkins and Mortty Ivy, running back James Johnson, offensive guard Nevin McCaskill, fullback-tight end Jamie McCoy and cornerback Donovan Warren.