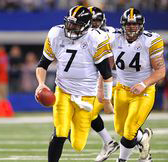 By Dale Grdnic
PITTSBURGH — The Pittsburgh Steelers offensive line woes notwithstanding, there are several other issues that need to be addressed as well.
The Steelers have just 257 rushing yards, 3.3 yards per carry, while allowing 298 rushing yards, a whopping 4.6 yards per run. They have scored two touchdowns on the ground and allowed two as well. Those numbers need to be turned around for the Steelers to continue to be successful.
Speaking of stats that need to be reversed. Turnovers have been hugely lopsided against the Steelers this season, so it’s actually a miracle that they’re 2-1 with 10 turnovers by the Steelers and just one for them.
“And this is why it’s concerning,” Steelers coach Mike Tomlin said Tuesday during his weekly press conference, “because we’re not doing a good enough job of protecting the ball, and we’re not doing a good enough job of getting it.Those two things together can make you extremely uncomfortable.
“So, we’re a blessed group to be sitting here at 2-1 (and) at minus-9 after three games. … We’ve got to be near the bottom of the NFL if not the worst. So, we’ve got to get better in that area, preserving and protecting the football and getting it.
“Thankfully, when it mattered on Sunday in significant moments, we were able to maintain the ball offensively and we were able to get the ball defensively,” Tomlin added. “That’s why we were able to get out of that stadium with the necessary win.”
Defensive coordinator Dick LeBeau said last week that it was too early to be concerned about not getting more turnovers, but he appears to have turned loose safety Troy Polamalu to force the action a bit more. Also, outside linebacker James Harrison appears to be playing better, and he can force the opposition into making mistakes by himself.
“I don’t know if it was anything done in reaction to the Baltimore game,” Tomlin said. “It’s just about us developing our personality as a defensive unit as the reason roles on. Obviously, Troy is a big component of that and putting him in a position to do what he does extremely well.
“Of course, that’s moving around and pressuring and showing up in the run game, blitzing and covering. Troy’s a multi-faceted guy, so we have to be open-minded in terms of how we utilize him, and we will be. … So, I’m just talking about now and how we’re going to utilize him to help us win.”
Tomlin added that he did not believe the Steelers were waiting for Polamalu or Harrison, or anyone else for that matter, to make a big play. He noted that all the Steelers believe a big play can happen at any time on the field whether it’s on offense, defense or special teams.
Interestingly enough, the Steelers are ranked first in pass defense in the league, and that speaks to how well the secondary has played, among other things.
“I think it’s early,” Tomlin said. “It’s early in the season, but we are getting some good play from some guys. Troy being one of them, and Ike Taylor being another. But it’s very early in the season, and we’re going to be tested this week by Schaub and Johnson and Company.”
The other side of the line is a different story. Quarterback Ben Roethlisberger has eight of the team’s 10 turnovers with four interceptions and four fumbles. Each was critical in its own right. One fumble was returned for a touchdown at Indianapolis, and it put victory in jeopardy.
Roethlisberger also has been sacked nine times for 73 yards lost. All of Roethlisberger’s fumbles have come on sacks, so the Steelers quarterback must take care of the ball much better for the club to continue its success. Sooner or later, that likely will catch up to the Steelers if the trend continues.