Steelers – Wednesday: Ben on health, criticism towards Tomlin & intentions to play vs Rams 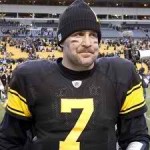 By Dale Grdnic
PITTSBURGH — One thought ran through Ben Roethlisberger’s mind as he laid on the grass at Candlestick Park Monday night, the scene in the movie Cool Hand Luke when Paul Newman is battered and beaten but still gets up.
Like Luke (Newman), Roethlisberger could have stayed down a while longer, but he decided to get up and stay in the game against the San Francisco 49ers.
“I’m always going to try to get up,” Roethlisberger said Wednesday prior to practice. “I didn’t want to come out of the game, and I told Coach that even if I’m at five percent I’m ready to play.
It’s the passion I have for this game and the passion I have for my brothers in this locker room. (But) I’ve never had to play at five percent, so I really don’t know what that’s like.”
Even though it appears to be a long shot for the Steelers to get back atop the AFC North Division and despite rumors to the contrary, Roethlisberger still wants to play against the St. Louis Rams Saturday at 1 p.m. at Heinz Field. It also looks better for center Maurkice Pouncey, who missed the Niners game.
“As I’ve said many times before, I want to go, and I’m going to try to be ready to go,” Roethlisberger said. “(And) unless Coach says something, I’ll wait to hear from him about this week. … I didn’t think I’d be able to walk (Tuesday) and today, but actually it feels a lot better than I thought it would.”
When told that Steelers coach Mike Tomlin was criticized not just for playing Roethlisberger, but for leaving him in the game after the outcome appeared to be determined much earlier.
“I don’t think he should be criticized for that,” Roethlisberger said. “I’m glad he let me go out there and play, but I wish I could have played better. And I think if I would have played better, I don’t think people would have said a thing. I’m not saying I talked him out of taking me out, but I didn’t want to quit. He asked me if I wanted to come out, and I said: `No.’ (So), it’s on me.”
Roethlisberger did not believe that his lack of practice time last week was a determining factor in the way he played, nor would he advocate taking a pain-numbing shot prior to game time.
“It was hard to get in there and do some things, obviously, but I’ll take the blame for the loss and not playing well,” Roethlisberger said. “It had nothing to do with the preparation, but it was just one of those days when I didn’t play well. (And) it was very frustrating, because I felt that I could have made a couple more plays in that game and got out of a couple of those sacks.
“So, it was frustrating for me, the receivers and linemen, because they’re so used to it. So, it definitely was tough. (But) I drink a lot of milk, so I just hope it heals quickly. (And) I wasn’t nervous about going out there and getting injured even more. I don’t go out there and worry about injuries. I want to be out there and get reps to work on the little things to get us ready for January football.
“I know they made a big deal about (getting an injection), but we’re not going to do it because we’re not going to hurt ourselves and the team in the long run,” Roethlisberger added. “I think you’d be surprised. It doesn’t happen as much as you’d think. I think that’s more idiotic than going back into the game after a concussion. It’s not worth it not knowing if you’ve hurt yourself worse.”
While Roethlisberger basically determined this past Saturday that he was able to play two days later, Pouncey, who basically suffered the same injury — a left high-ankle sprain — wanted to play against the Niners but just couldn’t.
“I wanted to go out there and play as much as Ben did, but I just wasn’t able to do anything,” Pouncey said. “I give him a lot of credit for what he did, because I couldn’t do it. I couldn’t push off to control a defensive lineman. There were problems with leverage and things like that, so I decided not to play.
“But I feel a lot better this week. I’ll do some individual stuff early, but they gave me a little brace to try out. So, I want to practice and play in the game. I want to be out there and help my team and be a leader on the O-line. I feel a lot better this week. There’s still some pain, but I feel a lot better after the rest and rehab last week, and I hope to be even better in the next couple days.”
If Pouncey can play, Doug Legursky would move back to left guard.