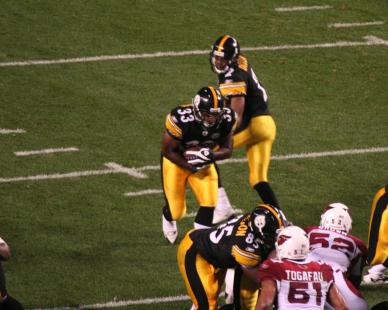 By Mike Bires
Photo: David Hague – Inside Pittsburgh Sports
LATROBE _ Isaac Redman is fast becoming “Mr. Touchdown.”
In Thursday’s 20-10 preseason win over the Arizona Cardinals, he scored both of the Steelers’ TDs.
Then during a seven-play goal-line scrimmage Sunday, he got the ball on all seven plays and scored on five of them.
“Everyone likes being in the end zone, especially a running back,” said Redman, an undrafted rookie out of Bowie State University, an NCAA Division II program located in Maryland not far from Washington, D.C.
After the win over Arizona at Heinz Field, coach Mike Tomlin said he wanted to give Redman some work with “the varsity.” Such was the case Sunday at St Vincent College.
On his first two carries, Redman ran with the first-team offense. He scored both times against the first-team defense. Then on his third attempt with the second-team offense, he scored again against the first-team defense.
The Steelers are trying to find a consistent, productive short-yardage back since Gary Russell was cut during the off-season.
“He still has a ways to go,” coach Mike Tomlin said. “That’s the process. But he represented himself very well today.”
On the depth chart, Redman is behind Willie Parker, Rashard Mendenhall, Mewelde Moore and Justin Vincent at the halfback spot.
Touchdown Breakdown
1st Touchdown: Redman got a key block from David Johnson who was the fullback on the play to put the offense up 1-0.
2nd Touchdown: In single back formation, the middle was clogged but Redman bounced to the right side on a good block from starting right guard Trai Essex for the touchdown.
3rd Touchdown: Frank Summers was the lead blocker (in motion) for Redman and made a crushing block on Tyrone Carter to spring Redman into the end zone. Sean McHugh was the fullback on the play.
The offense went up 3-0 and then Redman was stopped on consecutive runs.
4th touchdown: Redman scored on a sweep to the right side. Frank Summers was the lead full back.
5th touchdown: Summers was the lead full back on the play, as Redman scored on a run to the right side.
*Offense won the drill 5-2
McDONALD MAKES HIS BID
In camp, the two wide receivers getting the most media attention have been Limas Sweed, a second-round draft pick last year, and rookie Mike Wallace, a third-round pick this year. But Shaun McDonald has been making some commotion as well.
In Thursday’s win over Arizona, McDonald led all receivers with six receptions for 69 yards. On Sunday, he made a spectacular 17-yard touchdown catch on a pass from third-team quarterback Dennis Dixon during 11-on-11 team drills.
McDonald, who can also returns punts and kickoffs, seems poised to be the fifth wide receiver.
“People forget that he’s a been there, done that guy,” back-up QB Charlie Batch said. “A couple of years ago in Detroit, he caught 79 passes for almost 1,000 yards. He’s a veteran who’s been around. He knows what he’s doing out there.”
McDonald is a seventh-year pro who played four seasons with the St. Louis Rams before spending two years in Detroit.
INJURY UPDATE
Rookie guard Kraig Urbik missed his first practice of camp for what Tomlin said was a scratched cornea. Urbik is expected back today.
Strong safety Troy Polamalu (calf) and defensive end Travis Kirschke (ankle) didn’t take part in team drills. Kirschke was hurt in a pass rushing/blocking drill as he tried getting by tackle Jason Capizzi.
Meanwhile, running back Mewelde Moore sat out again with a tender hamstring.