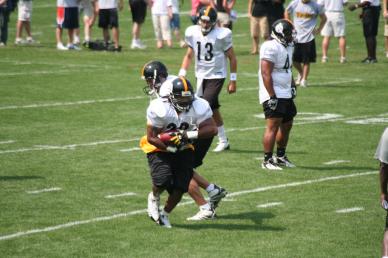 By Dale Grdnic
Photo: David Hague – Inside Pittsburgh Sports
LATROBE, Pa. — The Pittsburgh Steelers searched for a goal-line and short-yardage specialist all last season and never really found that guy, but it looks like they might have gone a long way toward finding one Sunday.
Bullish rookie back Frank “the Tank” Summers, at 5-foot-10, 240 pounds, and 6-foot, 230-pound rookie free agent Isaac Redman both scored on the second-team defense.
Starting tailback Willie Parker missed a second day with back spasms, and backup Rashard Mendenhall was stuffed on three attempts.
“You just have to find the hole and go,” Redman said after his two scores capped the event won by the defense, four stops to three touchdowns. “If you do too much dancing around, those holes are going to close up real fast. So, I just try to see a crease and go.
“I hope I showed them a little something today, and I can go smile about it for a while. But I can’t let it go to my head. I still have a lot of work to do to make this team. I’d like to think I have a good shot, as long as I continue to work hard, take advantage of my opportunities and stay injury free.”
There are several team periods during each training camp practice and various one-on-one drills that are fun to watch, but none compare to the goal-line sessions at Saint Vincent College.
Sunday’s was interesting, because it looked like things would end after the defense had four straight stops in the best-of-seven competition.
But Steelers coach Mike Tomlin let the offense get three more cracks, and that second-team group scored three straight times.
“They scored three times, so we’ve got a little more work to do,” Steelers inside linebacker James Farrior said. “The first team did pretty good, as usual, because we really take a lot of pride in this as a group. We don’t want the offense to win. And I think we’ve done pretty well over the past few years.
“(So), guess it’s the second team that has a little more work to do, because they got in on them three times. We’re a little disappointed in that, because we wanted to shut them out today. The period should have been over, but Mike Tomlin wanted to give the offense a couple more tries. I guess he has to keep their morale up, so he had to give them something. And we gave three TDs.”
The Steelers used an interesting defensive set for their goal-line defense with five linemen, five linebackers and a safety. Keyaron Fox was the extra linebacker, while Travis Kirschke and Nick Eason were additional interior linemen. Tyrone Carter was the only DB, replacing Troy Polamalu just for this drill. And Chris Hoke replaced Casey Hampton.
“We matched personnel,” Tomlin said. “If you noticed that we had all big people in the game offensively, so we had a DB-like guy who can adjust with the motion man. And if someone would put a receiver in there, of course, we would bring in (cornerback) Ike Taylor. So, you just have to match up.”
The initial series started on the 1-yard line with Sean McHugh lined up as the fullback, and Mendenhall dotting the I. Fullback Carey Davis also was in the game, and he went in motion. Mendenhall tried to go right, but outside linebacker LaMarr Woodley slashed in and cut him down for yard loss.
On second down, with the same backfield, Mendenhall tried to go even wider right, but tremendous pursuit stopped him for a one-yard gain to the original line of scrimmage. Farrior and Hoke clogged things up, and DB Roy Lewis finished him off.
Summers came in on third down as the deep back with McHugh leading the way, and Davis in motion. This group was stuffed as well, as Summers hammered the middle of the line.
The middle of the D-line had a stalemate, but Farrior underneath and Carter over the top nailed Summers for a half-yard loss.
Summers got the ball on fourth down as well, with McHugh and Davis close to the line. Summers pounded the middle again, but Arnold Harrison, Steve McLendon and Sonny Harris played key roles in keeping him out.
Summers decided to avoid the middle and used quick feet with good vision to finally pick a hole for the score. He followed guard Kraig Urbik and tackle Jeremy Parquet into the end zone.
Redman came in for the final two plays and scored both times. With Summers as the lead fullback, he hit the line and Redman slipped off to crack the goal line.
On the final play, Redman scored again, as massive tackle Jason Capizzi (6-9, 330) lined up at tight end and led the way. Redman bowled over linebacker Andy Schantz at the end.
“The emphasis of the practice was focused on short-yardage and goal-line, and I liked some things that I saw from both sides of the ball, offensively and defensively,” Tomlin said. “We’ll get another opportunity to do this again before too long, as we continue the process of building our football team.
“Those guys need to understand the tempo of short-yardage and goal-line. Pad level is critical. Snap count is critical, particularly on the defensive side. And there are a lot of minute details, but you can’t beat yourself in those instances. And then, of course, the lowest man wins (by getting leverage).”
The Steelers are scheduled to practice twice each Monday and Tuesday, have a walk-through Wednesday and the first preseason game against Arizona Thursday night at 8 at Heinz Field.