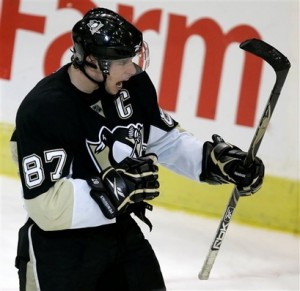 Sidney Crosby’s dominance against the Montreal Canadiens continued Wednesday night.
Crosby scored a goal and set up another with an highlight reel no-look pass, setting up a Sergei Gonchar goal as the Penguins defeated Montreal 3-1 at Mellon Arena in what will be the final regular season game that the Canadiens will play at Mellon Arena.
Despite being hit with a number of injuries in the first two months of the season, Pittsburgh matched a franchise record for 17 victories in their first 25 games.
The Canadiens have brought out the best in Crosby as the star center has four goals and an assist in two games against Montreal this season. Crosby has nine points in his last seven games after being held pointless in five games, while his sidekick Evgeni Malkin was sidelined with a shoulder injury for seven games.
Since returning to the lineup on November 14th, Malkin has points in five of six games and has jumpstarted the Penguins offensive attack, which struggled mightily in his absence.
Malkin (22 pts) has a team leading 16 assists in 18 games played. What to watch for through the course of the season will be whether Malkin will get back to being a 45+ goal scorer as Malkin netted 47 goals 2007-2008 season.
Since Malkin’s 47 goal output, he has become more of a playmaker after scoring only 35 goals last season and is on pace for 20 goals in 59 games played this season according to “Stats” projections.
The Latest Buzz
Defenseman Martin Skoula has caught the eye of many inside the Penguins organization and when the Penguins get back to full health on their blueline, Head coach Dan Bylsma now has the option of sitting a defenseman who is not playing well.
The coaching has the confidence in Skoula that he can be a top-6 defenseman on this team and Bylsma won’t think twice about sitting a defenseman who is struggling.
*What Ben Lovejoy has had to do since being called up is make the front office a believer in him. Some members of the organization have not been sold on Lovejoy like former Assistant GM Chuck Fletcher was, who regarded Lovejoy as a top 5 prospect.
According to a number of team sources, Lovejoy has made quite an impression since being called up.
At age 25, Lovejoy is a late bloomer who has been a plus player in all seven games since being recalled from Wilkes Barre/Scranton. If Lovejoy continues to play with the consistency that he is playing with, he will be well on his way to earning a one way contract.
A team source tells me Lovejoy is making some of Pittsburgh’s potential free agents expendable.
*With Kris Letang on target to return this weekend, who stays in the lineup between Deryk Engelland and Ben Lovejoy?
Based on performance, Lovejoy should stay in the lineup as he is averaging 2 minutes more of even strength time (last 2 games) compared to Engelland.
*Winger Chris Kunitz will not be available to play this weekend. Kunitz remains sidelined with a lower body injury and has not started skating. He’s hopeful to get back on the ice early next week. Initially it was believed he would only miss two weeks.
*Tyler Kennedy (groin/hip) is hopeful to play Saturday night against the Rangers. Kennedy will be a coaches decision Friday afternoon.