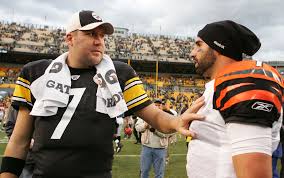 By Dale Grdnic
PITTSBURGH — It didn’t take long for Bruce Gradkowski to settle into his new home in Pittsburgh, mostly because the Steelers new backup quarterback spent the majority of his life in the city.
A graduate of Seton LaSalle High School and the University of Toledo, Gradkowski returned to his hometown in March and has been on the practice fields for organized team activities (OTAs) as Ben Roethlisberger’s backup.
“I’m thrilled to be back home,” Gradkowski said. “Most importantly, it’s to a great organization. This is a championship organization. I was just talking to Coach Tomlin about it. We’re here to win championships. You talk about it other places, but it’s a reality here. To see all the past, present and the future that you can achieve here, all the great players that have come through here, it’s an honor to be a part of this organization.
“(So), I’m thrilled, and I’m excited. It’s great for my family. I know they’re excited as well. … I’m just proud and happy to be a part of such a great organization with such a huge, awesome fan base. That’s one thing I told my wife, I want to play for a group, a good organization with good fans. Now, I’ve come to a great organization with great fans. I can’t be happier.”
The Steelers are Gradkowski’s fifth NFL team in eight NFL seasons, and he has played in 36 games with 20 starts. Gradkowski has completed nearly 53 percent of his passes for 4,057 yards and 21 touchdowns with 24 interceptions. He has been sacked 53 times, but he keeps getting back up and moving on with his professional career.
“I’m not the biggest,” Gradkowski said. “I’m not the fastest or the strongest, but I’m going to work hard. That’s one thing my parents have taught me. You have to work and earn it. I have to earn it, and that’s OK. I’m going to do it, but … I’m very blessed with this opportunity and this chance. To be playing now, going into my eighth year, is such a blessing. I can’t say it enough.
“I’m just happy to be here, back home, a part of an organization that I have cheered for and rooted for my whole life growing up. It’s such a great organization. I can’t say it enough, a championship organization, and I’m ready to be a part of that. (So), whatever I need to do to help this team win, I’m going to do it. (And) I’m looking forward to working with Ben.”
Gradkowski has played with a number of different quarterbacks during his career with the Tampa Bay Buccaneers (2006-07), Cleveland Browns (2008), Oakland Raiders (2009-10) and Cincinnati Bengals (2011-12), but none have been like Roethlisberger.
“He’s one of the best quarterbacks in the NFL,” Gradkowski said. “He’s a unique player. He makes plays. He’s exciting to watch because he’s a competitor, and I’m a competitor. I want to continue to get better, to learn from him and do what I can to help this team. … I’m excited because there’s a great franchise quarterback here. To get to play with him is amazing.
“And to be part of this is amazing. I haven’t had that yet, to be somewhere where that guy is the guy. Ben is the guy. To watch him make plays out there, he’s a competitor, and that’s what I respect the most. He’ll do whatever it takes to win. … I’m a Pittsburgh guy. I’m going to work hard, be prepared and whenever my time comes, if it comes, I’ll be ready.”
In his football career, Gradkowski has two victories against Pittsburgh teams. He threw for more than 300 yards and three touchdowns to lead the Raiders to a comeback win against the Steelers at Heinz Field during the 2009 season and also beat then No. 9-ranked Pitt in 2003 at Toledo. Gradkowski was 49-for-62 for 461 yards and three touchdowns in that comeback win.
“Those were some big wins,” Gradkowski said. “They were a lot of fun for my family and friends, but now that I’m back home I’m working hard so I can do the same thing for the Steelers if I get the chance.”
And if something happens to Roethlisberger, the Steelers will be happy to give Gradkowski that opportunity.