Time for Malkin to “Stand and Deliver” 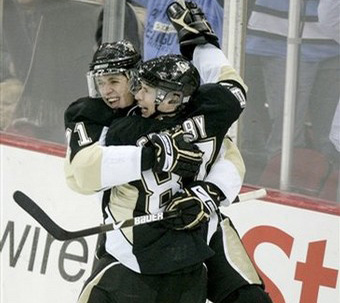 By MARK MADDEN
First, for the record:
*Evgeni Malkin is really hurt. These aren’t thinly-disguised healthy scratches.
*GM Ray Shero is not REMOTELY thinking about trading Malkin.
Malkin has a bum knee. Nothing serious. If the Penguins needed him, Malkin could play. But they don’t, especially not the way he’s been playing. He’ll probably return to the lineup Saturday at Buffalo.
When he does, it’s time for Malkin to stand and deliver.
Malkin, to his credit, has not made any excuses for his poor play.
His apologists have. The rationalizing is off the charts. He’s not comfortable with the system. His linemates are inadequate. He misses Sergei Gonchar. He’s not used properly on the power play. He needs to play center. Blah, blah, blah, on and on.
You can’t tailor your concept around your team’s second-best player. That’s what Malkin is, No. 2, way behind Sidney Crosby…in fact, he may currently be No. 3 behind Crosby and Kris Letang.
No matter the system, linemates or position, Malkin has to start racking up points. He gets the same paycheck as Crosby. It’s unrealistic to expect him to keep pace with Sid production-wise. But Malkin should be in the same ballpark.
Malkin is 16 goals and 24 points behind Crosby. Ain’t no ballpark. Malkin is four points behind Letang, for God’s sake.
Malkin apologists clamor for Coach Disco and his staff to “find a way to get Geno going.” Nonsense. Malkin is 24. This is his fifth year in the league. He needs to get himself going. Malkin clearly doesn’t possess the drive Crosby does.
The time for hand-holding has come and gone. Time to grow up. Time for goals and assists.
Malkin will not be traded this season. I guarantee that.
But if Malkin doesn’t get much better real soon, it sets up a sticky situation down the road. Crosby will presumably re-up for the cap max in 2013. Malkin will want the same as Crosby in 2014, because that’s what he’s always got. Can’t give it to him. He’s making $8.7m right now, and his production doesn’t merit half that.
At that point, Malkin walks. Recognizing that possibility, you’ve got to trade Malkin long before then.
Meantime, the puck belongs to Crosby. When they did Kiss Cam Monday night at Consol Energy Center, it showed Sid making out with the Art Ross Trophy. WEIRD.
Mark Madden hosts a radio show 3-6 p.m. weekdays on WXDX-FM (105.9)