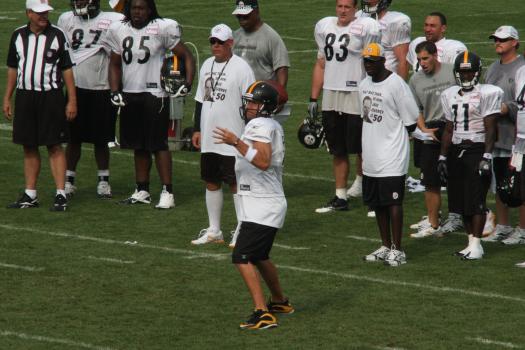 LATROBE, Pa. — Pittsburgh Steelers coach Mike Tomlin noted Thursday at his starters would play some 8-12 snaps during the first preseason game against the Detroit Lions Saturday at 7:30 p.m. at Heinz Field, but he would not name a starting quarterback or set a rotation for the players at that position.
Tomlin added that all four quarterbacks might play, but it’s also feasible that Ben Roethlisberger could be with the second team or he might not play at all. So, Tomlin revealed little as far as the quarterbacks were concerned, other than people will need to come to the stadium to find out who plays and when.
“We’re still somewhat undecided about those things, but I think that’s been the best thing about the way we’ve approached our quarterback situation,” Tomlin said. “We started with a plan, and we have stuck with it. We’ve given all of our guys their share of opportunities so far during training camp.
“We wanted to provide Ben with enough opportunities to have a productive camp and during the preseason, but at the same time we wanted to get clarity in our quarterback situation. I think we’ve stayed true to form thus far, and we’ll continue with that as we get into the (preseason) games.”
What appears to be likely is that Leftwich will start, and three quarterbacks will play. If Roethlisberger plays, then Batch won’t.
And while he has gotten a fair share of snaps this past week, he barely got a handful the opening week. As far as Steelers offensive coordinator Bruce Arians is concerned, and every coach for that matter, the first preseason game is used to look at the younger guys.