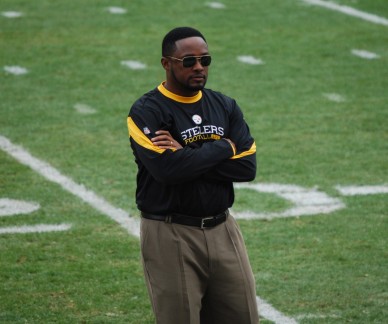 That was Mike Tomlin’s answer to a question about the thinking behind having Ben Roethlisberger throw a 26-yard pass into the end zone on fourth and one in the first quarter Monday Night against the Redskins.

Antonio Brown, of course, made the catch and the Steelers had a 7-6 lead on the Redskins.

They completed a pass for a first down on fourth down prior to their second touchdown.

Meanwhile, the Redskins’ coach, Jay Gruden was punting from the Steelers’ 41 and kicking field goals.

That’s called playing not to lose.

Mike Tomlin may not be the best game manager among NFL coaches but you have to give him credit for being aggressive.

Nobody goes for two points as often as he does and he has the sideline demeanor of a guy who looks like he wants to be the one who will be dictating the action.

This Steelers offense, even without Le’ Veon Bell and Martavis Bryant and Heath Miller looks good enough to go for it every time on fourth and short no matter where it is on the field.

Think it might be time to give Todd Haley some credit for that?

You remember Todd – the guy who just about every Steelers fan wanted to run out of town two years ago.

I admit I made fun of his dink and dunk offense, but it’s hard to argue with what the Steelers put out there every week.

One legitimate criticism has been the lack of touchdowns and that was a big difference Monday night. They scored five of them with only one field goal.

The Steelers offensive players – especially Ben Roethlisberger – haven’t been shy about setting at least 30 points a game as their goal and after Monday’s 38 there’s no reason to believe they can’t do it.

The defense looked much better than expected but some of that credit has to go to the Redskins’ quarterback, Kirk Cousins.

He was terrible and didn’t do himself any favors as a franchise player looking to score the multi-year mega contract.

He did the Steelers defense plenty of favors by making lots of bad throws and choosing not to run into open field against the zone defense.

And he’s making $20 million this season.

If Kirk Cousins is a $20 million quarterback, Ben Roethlisberger should get $200 million.

Roethlisberger has never looked more confident and he has no reason not to be. He has Antonio Brown, who showed again Monday night that he’s not just the best wide receiver in the NFL, but the best player.

Both of Roethlisberger’s touchdown passes to him were excellent throws, but Brown was well covered and he made two tough catches look ridiculously easy.

-Has Kevin Colbert ever signed a better free agent than DeAngelo Williams? His 143 yards rushing were the most in the NFL in Week 1. He also caught six passes.

And he’s a backup.

I thought the Steelers were going to lose Monday night because I wasn’t sold on their defense. I’m still not sold on it because Cousins was so bad, but I made the mistake of thinking that missing three major components of their offense would hold them back.

They got the 30 they needed and they’re going to be tough to beat when they get Bell back. 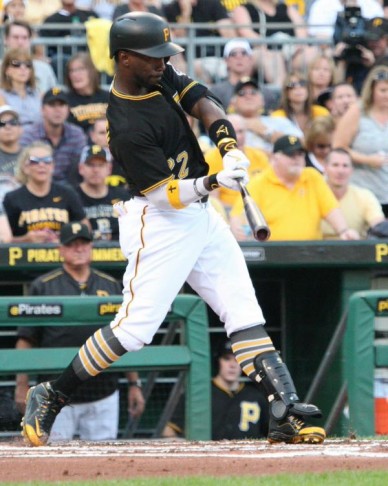 -The Steelers did everybody a favor by coinciding the start of their season with the Pirates’ collapse.

For a while there the collapse was usually completed by Memorial Day but there were big expectations for this team.

The difference between a 98-win team and an 85 win season is about two wins a month. [hide]

Do you think if Andrew McCutchen had hit .340 the last two months instead of .250, the Pirates would still be in contention for the Wild Card?

Remember, the difference between winning 98 games and winning 85 games is about two wins per month.

Blame the manager. Blame the Nuttings. Blame anybody you want but when your ace and your superstar stink, losing two more games per month is easy. It’s just about inevitable.

Hope you enjoyed the bridge year.[/hide]

…and once again, depaoli is on a milk carton. haha

Bills put up 30 on the Jets and then fire their O Coordinator. Makes sense.

That team is a joke. One thing you realize is how important having Ben is. There’s a lot of teams that have been looking for a qb for a long time. You can’t do anything without one.

Hurdle loves him some Sean Rodriguez and John Jaso.

huh….and as I say that they each homer.

Couldn’t agree more. They both suck.

I’m fine with that. Admitting a pirate sucks is the first step towards understanding how pathetic they are.

Still better than the Brewers.

Ryan Braun did nothing wrong.

Nothing Marlon Byrd didn’t do, but you had no problem rooting for him. And I know the brewers suck. That’s called being realistic. It’s clearly foreign to you. At the end of the day, they are both below .500 and hopeless, but I’m not on here making asinine statements about marginal talent.

Marlon Byrd didn’t lie the public, buried the reputation of a specimen collector for something he didn’t do to the point of threatening a phony lawsuit, make Aaron Rodgers look like an idiot so much that Rodgers cut business ties with him, then be stupid enough to get caught again. But other then that, yeah they’re basically the same.

But, you did make asinine comments about marginal GMs.

Lol I didn’t even say anything about a GM. And everyone who takes steroids lies about it. It’s just upsetting that Pittsburgh has franchise as embarrassing as this one. Their fans are even worse. Easily the most clueless and naive group on the planet.

You’ve never said anything about the greatness of Ken Macha, lol okay.
And few have made a bigger *** of themselves and others than Braun. You say we’re naive and clueless if you can see why someone on your favorite team is one of the most hated players in baseball, especially now that A-Rod is gone. But hey everyone else cheated so I guess it’s okay to tear everyone else down with him.

I didn’t say anything about Macha? Please show me this. Wtf are you even talking about? It’s like arguing with a ten year old. And I never said I can’t see why, I just said I don’t care. Get a clue, man. Or learn how to read.

Oh, and all this aside from the fact that Ken Macha isn’t a GM, genius.

Still beating that horse I see. I guess you have to hang onto something.

Maybe he won’t be as good going forward. But I’ll take an average Nova over the suck pile behind him.

If the Pirates win a game but no one writes about it, did it really happen?

As much as I hate giving John any credit, his last paragraph is spot on. There’s no denying that NH deserves criticism for his failure to address the starting rotation in the off-season, there’s no denying that CH deserves criticism for his lineup and in-game decisions but at the end of the day if Cutch, Cole and Liriano perform as expected the rest is a moot point because they would still be a 93-95 win team that was firmly in the playoff picture.

I can already hear the explanation if Cole is out for an extended time next year and Nova walks. “Well, we’re confident Chad Hutchison can fill in, even though he has not had success at the Majors or Triple-A for us yet. We also just have to wait until Glasnow is ready in June.”

Novas parents don’t talk about him as much as you do. He’s a mediocre player on a mediocre team.

Except they don’t, which is why he was basically given away. Keep drinking the Kool aid.

What’s your point? Arrieta’s career era before joining the Cubs was 5.23 through over 400ip in the majors. How could they possibly still have a guy that sucks so bad on their roster, that bum shouldn’t even be collecting a Double-AA paycheck let alone a major league paycheck.

JA Happ has a career era of 4.02 and might win the Cy Young man does he suck.

No who cares about that jay. A guy can’t turn his career around.

You do know that Arrieta is an outlier, correct? Comparing Nova to Arrieta. That’s great. It’s unreal how delusional and naive pirate fans have to be in order to justify being a fan. For every ten crappy pitchers, there’s 9 that continue that trend. Out of the ten percent that don’t, maybe ten percent of those guys will have Arrieta type years. It’s pathetic how pirate fans grasp at straws. It’s fun to watch though. Them continue to lose and you losers continue to make excuses. Nova = Arrieta. Brilliant. One of the best ones yet.

You know a pitcher can change his mechanics and become a completely different guy, right? Surely the great Ken Macha knew that.

I can just as easily make the argument that, even with their sub-par performances, this team makes the playoffs if they acquire decent talent to stave off those sub-par years, rather than relying on Locke, Nicasio and Vogelsong to start the year, which might cause a snowball effect that precludes them from trading Melancon thereby losing more games due to Tony Watson sucking out loud. I’m not saying you’re wrong – but this is a more difficult question to answer than you and John are making it out to be.

I’m not denying that as all, as I said NH deserves all the credit he’s getting for not addressing the starting rotation in the off-season. I’m just more confident in the effect of the “known” than I am of the unknown, it’s unknown what would have happened if they signed a few pitchers because the majority of the FA pitchers signed in the off-season have not performed well this season but the impact of Cutch, Cole and Liriano performing at the normal levels because we’ve seen it first hand. Sure spending big on a few pitchers MAY have help compensate… Read more »

They’ll have some ‘splaining to do if they decide to go with the unknown again next year. They pretty much said this year was a bridge year and next year was what they were building for, and to just assume guys like Glasnow or Hutchison can assume large roles right away, or going with another group like Nicasio and Locke until they are ready in June or some other BS, is not going to cut it.

I agree. Even though most fans probably won’t agree I do think they need to make a splash I don’t think it has to be a big splash, a big part of the “bridge year” mindset was basically killing time waiting for the young pitchers to come along so now that Taillon has established himself and Kuhl/Glasnow/Brault have to a lesser extent they’ll fill voids that existed at the beginning of 2016. Realistically adding 1 quality pitcher, whether it’s resigning Nova or trading for a guy like Archer, should be enough. A rotation of Cole-Taillon-Nova/Archer-Kuhl-Glasnow/Brault/Kingman isn’t a bad start to… Read more »

I agree. Not like anyone is running away with that second Wild Card spot.

Though I do have to wonder on your point with Watson. He wasn’t exactly lighting the world on fire this season before moving to that role, and would they have just lost some of those games anyway with him just blowing it in the 8th. Maybe not, but I do wonder.

Fair comment on him potentially just blowing it in the 8th.