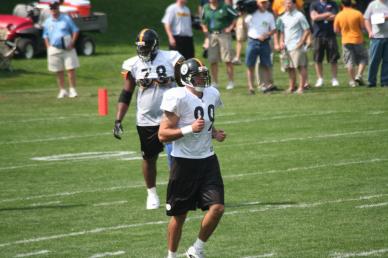 By Mike Bires
Photo: David Hague – Inside Pittsburgh Sports
Steelers kicker Jeff Reed is already putting his latest run-in with the law behind him.
He was not punished, at least publicly, by coach Mike Tomlin.
And he does not expect to be punished by the National Football League although its investigation is ongoing.
“The best way to get past this is to go to work today and move on,” Reed said before practice Wednesday.
Reed apologized to his teammates at a Monday team meeting following his arrest Sunday night outside McFadden’s, a North Shore bar not far from Heinz Field.
On Wednesday, Reed apologized to fans for his involvement in the incident that had Pittsburgh police charging him with simple assault, resisting arrest, disorderly conduct, and public intoxication.
“To the fans … I went to the (Penguins) hockey game (Tuesday) night and everybody was real complimentary and real nice to me,” Reed said. “They know that I love this community. I love Steeler Nation. I do a lot of charity work. So I if I need to apologize to them, I do apologize to them and I will never let this city down.”
Reed, 30, was arrested around 9 p.m. Sunday, roughly five hours after the Steelers beat the Cleveland Browns. Reed was taken into custody after Reed confronted police who were issuing a citation to Steelers tight end Matt Spaeth.
On Tuesday at his weekly press conference, Tomlin said that Reed would play Sunday when the Steelers (4-2) host the Minnesota Vikings (6-0).
Reed said he was “very satisfied” that Tomlin didn’t suspend him for the game.
“I was kind of shocked to hear people ask if I was going to play or not,” Reed said. “Stuff like this, you just got to deal with. It makes you tougher. And I’m a captain of this team. It may not sound like it when something like this comes up, but I like to represent this team as well as I can.”
SPAETH ALSO APOLOGIZES
If not for Spaeth urinating in public, Reed would not have been arrested Sunday night.
Spaeth, a back-up tight end, also talked to the media Wednesday. However, he had very little to say.
Spaeth.
“I apologize for the distraction that it caused to both the organization and my teammates,” is all Spaeth had to say.
In response to several other questions posed to him, Spaeth said, “All the answers to your questions will come from Coach Tomlin.”
Actually, Tomlin won’t have any answers regarding Reed or Spaeth any time soon. Tomlin only talks to the media on Tuedsays and after games.
SUNDAY’S GAME TO FEATURE OFFENSIVE STARS
Don’t be surprised if the Vikings and Steelers light up the scoreboard Sunday.
Offensively, the Steelers boast the NFL leader in passing yards _ quarterback Ben Roethlisberger with 1,887.
The Steelers also have the league leader in receiving yards _ wide receiver Hines Ward with 599. Ward is also tied for first with 41 catches.
Meanwhile, the Vikings’ offense is led by legendary QB Brett Favre, who’s third in the league with a 109.5 passer rating, and running back Adrian Peterson, who leads the NFL with 624 rushing yards.
“That’s a lot of fire power,” Steelers linebacker James Farrior said. “But you watch … wouldn’t it be funny if it’s a low-scoring game.”
INJURY UPDATE
Three Steelers missed practice Wednesday.
Ward and defensive end Travis Kirschke got the day off as 30-something veterans.
Strong safety Troy Polamalu didn’t practice as he continues his recovery from a sprained knee in the Sept. 10 season opener.
After missing four games, Polamalu did play Sunday against the Browns. But he may get a day off now and then for the next few weeks because he is not yet 100 percent recovered.
Mendenhall practiced, but only on a limited basis due to a sore knee.