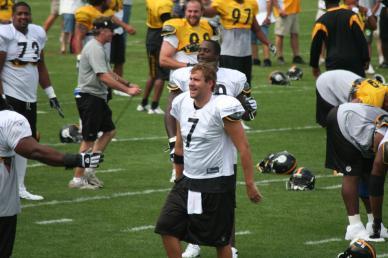 Pittsburgh Steelers quarterback Ben Roethlisberger has clearly used bad judgement and does not have the character of a Sidney Crosby for example but there are plenty of rumors circulating that are unsubstantiated and even wreckless reporting coming from reputable sites that are affiliated with the mainstream media.
I have heard all of the talk that Ben is not the nicest person in public and some of that is believed to be true based on accounts from restaurant and club owners who have dealt with him in the city.
There’s a strong notion that Roethlisberger has the attitude of a person who believes he’s entitled to everything, maybe that’s true, maybe it’s not, however, there is a lot of wreckless accounts going around about Roethlisberger.
One of the latest was from profootballtalk.com which is affiliated with NBC Sports.com and located on the front page of NBCSports.com.
The report is about a confrontation between Ben Roethlisberger and golf great Arnold Palmer.
The report starts out by saying, “We preface this by saying we don’t know whether it’s true.” But we’ve heard it from someone with connection to multiple NFL players.”
Per the report from PFT, “As we’ve heard it, Ben went golfing with Palmer at the Laurel Valley club in Latrobe. Ben, supposedly, was a general jerk during his round with Palmer.”
“So then Ben later wanted to play at Laurel Valley, and he dropped Palmer’s name in the hopes of getting in. (Or is it “on”?) Palmer eventually made a phone call to help get Ben in/on the course without Palmer there.”
“While on the course, Ben supposedly was rude to some kids. The kids ended up being Palmer’s grandchildren. The kids called Palmer, who then drove to the club and went berserk on Ben.”
The report then says, “Again, we don’t know whether it’s true. It might be, it might not be.”
This is the kind of wreckless reporting that is going around regarding Ben Roethlisberger’s character.
If there are actual sources who can back up that story, then report it. Don’t say “we don’t know whether it’s true. It might be, it might not be.”
This report is coming from the owner of Profootballtalk Mike Florio who was on the radio with Mark Madden of 105.9 WXDX just last week and indicated that head coach Mike Tomlin wouldn’t mind a quarterback change and he wasn’t talking about Roethlisberger’s antics off the field.
He was talking about Roethlisberger’s play on the field in how he holds onto the ball too much as a reason Tomlin wouldn’t mind a quarterback change and also indicating that Dennis Dixon is Tomlin’s guy.
For one Mike Tomlin is a bright man and not an idiot. He’s dreading any possibility that Ben Roethlisberger won’t be his quarterback.
Anyways, the report from profootballtalk is not the only report going around that is just pure speculation about Roethlisberger’s character. There have been plenty of them going around including one local media member even making an acquisation on his website that Ben Roethlisberger was on drugs during his night out in Georgia.
Yes, I’m sure Roethlisberger has been a jerk in public and he might be a jerk off the football field but it’s wrong to make acquisations that he might have been on drugs or that he might have been mean to a group of kids when the writer of the story claims “it might or might not be true.”
Meanwhile, long-time Steelers reporter Dale Lolley of the Observer-Reporter had a great take on the Roethlisberger situation.
Here are some quotes from Ben Roethlisberger and Arnold Palmer in 2008 by the way– courtesy of Steelers.com
“I have played with quite a few of them, Palmer said. I played with Terry Bradshaw and a couple of coaches, including Bill Cowher. I played with Ken Whisenhunt who is out in Arizona now and defensive coordinator Dick LeBeau. I played with both of them on the same day. I also played with Ben Roethlisberger. I think they are all pretty good golfers. Ben was outstanding. He did a great job and I enjoyed it very much.”
“It was awesome,” said Roethlisberger of the chance to golf with him at an outing. “It was Arnold and I on a team against Coach (Terry) Hoeppner and Spider Miller. We had a lot of fun. Just to be out there with him. He is a legend. He is maybe the greatest to ever play. It was fun to hear stories and watch him play. He chipped in a couple of times and had some great shots. It was a blast.
“I learned a lot. It wasn’t like he gave me any golf tips. It was just to be out with him and hear the stories. Just to be around a legend like that was unbelievable.”