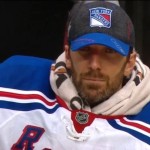 What you hear just about every day with this current Penguin team is that this team is different and as Mike Sullivan says, ‘the past is the past’.

The New York Rangers got off to the perfect start in Game 5, scoring 61 seconds in and out-shot Pittsburgh 9-1 to start the game. Yet, what was the story of this series for New York, despite carrying the play early, they couldn’t get that critical next goal to get Pittsburgh chasing the game by a multi-goal deficit.

1-0 Rangers lead, the Penguins with their fifth shot on goal tie the game on a Carl Hagelin goal.

In the second period, the Penguins then proved that this team truly is different in showing a killer instinct in burying the Rangers with four goals in the period.

Previous collapses when the Penguins were up 3-1 (2011 vs Lightning, 2014 vs Rangers) were situations where the Penguins just imploded in Game 5, suffering the type of losses that changes a series. 8-2 loss to Tampa Bay in Game 5, 5-1 loss to Rangers in Game 5 of the 2014 playoffs.

There would be none of that tonight.

The Penguins out-scored the New York Rangers, 14-3 over the final 140:48 of the series, and made Henrik Lundqvist never look worse in goal by continuing to beat him high.

Despite the six goal out-put from the Penguins, don’t overlook the importance of Matt Murray in this one.

Murray was shaky to start the game, was not tracking the puck well, and it looked like the Penguins might be headed towards getting the same type of poor goaltending they got in previous years in clinching situations.

Murray, though, who made 38 saves in the victory, was excellent over the final 45 minutes of the game with his angles similar to Game 4 as the Rangers were either going to have get a deflection goal or a perfect shot to beat him. This was another big step for Murray in giving the Penguins’ the type of goaltending that haunted them in past playoff years.

The second period dominance was filled with all facets of the Penguins’ game, with or without the puck, that has transformed them into a Stanley Cup Contender under Mike Sullivan.

What stood out most before Trevor Daley’s beautiful setup to Bryan Rust, 5:21 into the period that started the scoring rampage, was how the Penguins’ started to take the game over with their work ethic through the first 5 minutes of the period.

Not only the better team, but the Penguins were the more determined team in this series and their play in the second period of what was a 50-50 game after twenty minutes highlighted just how this team has evolved.

It’s not that the Rangers weren’t trying, Pittsburgh’s speed can just demoralize an opponent.

The second period was also telling of what has been the perfect storm for the Penguins in their turnaround this season when it comes to the personnel.

They got lucky and there’s nothing wrong with that.

This was an organization that had the 30th ranked prospect system going into the season from many publications and bottom-5 in many more.

Their depth is now one of the best in the NHL among the remaining playoff teams and much of it includes low pedigree players who were mostly regarded as NHL/AHL tweeners to go with a 39 year old center in Matt Cullen who no one saw being the offensive force he has been for the Penguins over the last two months.

When it comes to two major contributors in the Penguins clinching win and the series, not even the most optimistic Penguin team official saw this coming with the likes of Bryan Rust, Conor Sheary.

Sheary out of nowhere looks like a legitimate impact top-6 left winger (remember when the Penguins had a major left wing problem?) with a combination of Marty. St. Louis and a young Brian Gionta in his game.

Sheary skates, see’s the ice and shoots the puck at a top-6 level and he plays much bigger than his size. He can bounce off defenders much better than he’s given credit for.

The Penguins needed some luck to re-open their Stanley Cup window for this season and they’ve received it from Matt Cullen, to the Wilkes Barre players, to lucking into a trade where the Chicago Blackhawks were willing to take Rob Scuderi off the Penguins hands by throwing Trevor Daley into the deal.

Teams also need to get lucky to win a Stanley Cup.

Cullen is reminding me of Billy G, without the aggression.

Hey D….can you please write me an article about how the Pens are no different under Sullivan than they were under Johnson? And within that article, tell us how they are not scoring more under Sullivan. I notice you don’t use those stats anymore.

Malkin played 15:01min today 9.5m .maybe ref should’ve gave pens more power play in order that fraud plays more minutes. This show to you clowns malkin and his salary is a waste of space to this team and easily can be replaced

Just stop for a couple days, enjoy the win and give ALL players credit for playing a great series, no matter where they were born. Can you do that?

Fleury would have imploded.

i’m glad they have that goof shut down.

You are such a loser yogurt! Take your horribly unfunny side kick Maloni with you. 9th or 10th blow it up! Another one of your predictions that didn’t come to fruition. #Yogurtknew

You will always be Maloni to me.

Settle down mstar. Just having some fun. (Pssst Fleury sucks)

I was kidding as well. Yogurt is a douche. I actually think you are funny sometimes.

feelings hurt mstartari because somebody is playing better than your patron saint?

the biggest part about this team from the past is you don’t have a clown in the net.

The ‘bggest part about this team from the past’ is that they don’t implode after an early goal, regardless of who lets it in. Love the resiliency.

it was a deflection by rich nash, not a weak wrister from the boards.

No I support whoever plays goal. I’m smarter than you and only a yinzer blames the goalie all the time.