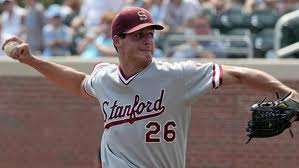 PIRATES NAB POTENTIAL ACE
The Pittsburgh Pirates shying away from Scott Boras clients in the first round of the draft is a thing of the past and the Pirates selected right-handed pitcher Mark Appel with the eighth overall selection in the annual First-Year Player Draft. Appel who was regarded as the possible No. 1 pick, fell due to signability concerns and the Pirates swooped him up getting excellent value and a player who should have been a top-5 pick.
As a junior this year at Stanford University, Appel went 10-1 with a 2.27 ERA and 127 strikeouts in 15 starts, including five complete games. He was named a First-Team All American by Collegiate Baseball, a First-Team All Pac 12 selection, the 2012 Stanford Regional Most Outstanding Player and as a semifinalist for both the Dick Howser Trophy and Golden Spikes Award.
Appelâs 127 strikeouts ranked first among all Pac-12 pitchers, while he also struck out at least 10 batters in eight of his 10 starts. He also became the first Stanford 10-game winner since Jeff Gilmore in 2005.
Regarded as a potential No. 1 pitcher, Appel gives the Pirates potentially three aces at the top of the rotation, joining Gerrit Cole and Jameson Taillon and all three should be entering the Major Leagues around the same time as scouts, evaluators project Appel could be in the Majors by 2014.
“We’re creating depth at pitching and you can never have enough pitching, ” GM Neal Huntington said. What the Pirates are accumulating is top of the rotation type pitching.
An interesting dynamic with selecting Appel is going to be the negotiations. “Our worst case scenario is the ninth pick in next years draft,Â  Huntington said. “Best case he joins {Gerrit} Cole and {Jameson} Taillon and all in the pitching system.”
Due to the new CBA, the Pirates are allocated a specific amount of money to sign their top 10 picks and if they go over their recommended slot, they will be penalized and forfeit future picks.
The Pirates have $6.6 million to spend on the first 10 rounds. A big chunk of that is going to have to go to Appel which played a factor in him falling to them at No. 8. If the Pirates go above $6.9 million, they will lose picks. According to ESPN’s Jayson Stark, if the Pirates were to exceed their pool by more than $1 million, they would get fined $1 million, plus lose 1st-round picks in each of the next two drafts.

*Has great velocity in the upper 90’s and he’ll sit at 93-97, touching 99. Appel is regarded as having a plus change up and above average breaking ball. The knock on Appel is that he’s struggled a bit with his command and hitters get a better look at his fastball than they should.