Analysis: What the Vokoun signing means for the Penguins and Fleury 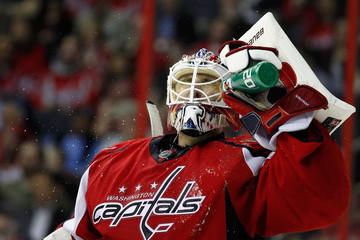 VOKOUN EYED TO PLAY 30+ GAMES?
Marc Andre Fleury struggles in the post-season and the Penguins goaltending situation has been a hot topic inside the organization since the Penguins first round exit. It led to the team prioritizing an upgrade at the backup goaltender position and they moved quickly working on a sign and tradeÂ for Capitals goaltender Tomas Vokoun late last week and finalizing the deal this morning with the signing of 35 year old netminder Vokoun to a two year, $4 million deal.
What does the signing mean for Fleury?
Vokoun is no ordinary backup and upgrades the Penguins goaltender positionÂ by a wide margin as a whole from where it was last season with Brent Johnson backing up Fleury. Although, he’s coming off an up and down season, posting a 25-17-2 record with a 2.51 GAA, .917 save percentage and four shutouts in 48 games with the Capitals, Vokoun still has No. 1 type ability but oneÂ former GMÂ I spoke with called Vokoun a tweener who is best suited for 35-45 games at this stage in his career.
The positive for the Penguins is that Vokoun will be in that exact type of situation.
The Penguins didn’t give Vokoun $2 million per season to play 15 to 17 games and be a normal backup. What was discussed internally among the Penguins brass in recent weeks leading up to the acquisition is Marc Andre Fleury’s sudden drop off in play from the regular season to the playoffs in the past three post-seasons.
The organization felt fatigue played a role to some extent and made it a priority to nab a goaltender who the team could count on down the stretch and be a difference maker when counted on.
The inability to go to a backup during the stretch run and rest Fleury some nights when fighting for playoff position was a major issue for the Penguins this past spring.
Sources say Vokoun was informed the team intends to lighten Fleury’s workload and that the starts will be there for him and he will also been given the opportunity to push Fleury for playing time if the opportunity presents it self.
One discussion between management and coaching staff has already centered around possibly going into the season with the mindset of limiting Fleury’s workload to even the low 50 game range.
I’m told Vokoun’s camp believes Pittsburgh intends to give him 30+ starts next season.
The Penguins also believe bringing in a goalie of Vokoun’s caliber is going to push Fleury and challenge him and hopefully make him even better.
Vokoun and Fleury getting along isn’t a concern for the Penguins as Shero and his staff regard Vokoun as having good character and Shero knows Vokoun from his Nashville days. Fleury and Vokoun also share the same agent but lets be honest we don’t know how this will play out. Fleury is accustomed to getting 60+ starts and as a No. 1 goaltender you want to be out there all the time.
For the Penguins though, they’ve walked into a great situation with potentially one of hockey’s best goaltending tandems.
Could we see a 50-52 to 30-32 split between Fleury and Vokoun next season? Don’t bet against it.

WHAT TO KNOW ABOUT VOKOUN

— Vokoun, 35, turns 36 on July 1 and according to his agent Allan Walsh is fully recovered from a severe groin injury. Originally drafted by the Montreal Canadiens in the ninth round of the 1994 Entry Draft, Vokoun has a career record of 287-284-78, along with a .255 Goals Against Average, .917 save percentage and 48 shutouts in 680 games with Montreal, Nashville, Florida and Washington.
— Vokoun ranks 6th among active netminders with 287 career victories
— Vokoun has posted 20 wins or more in nine straight seasons
— Since the lockout, Vokoun has the fourth best save percentage in the NHL at .921