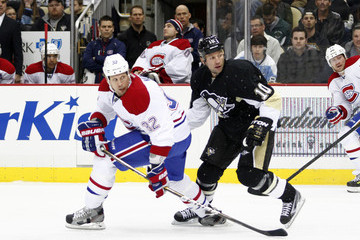 The salary cap is $64.3 million for 2013-2014 season and the Pittsburgh Penguins have have $63,623,333 committed to 20 players (11 forwards, 7 defensemen, 2 goaltenders) for next season. Qualifying offers to Dustin Jeffrey ($687,500) and Robert Bortuzzo (577,500) combine for $1.265 million. Harry Zolnierczyk who the Penguins feel could win a final roster spot, received a $660,000 qualifying offer last week and is likely to sign the tender barring the two sides working out a longer-term deal.
Jeffrey has full intentions to sign his tender, while Bortuzzo could see his salary rise to around $625,000 as the Penguins intend to look into signing Bortuzzo to a two year extension this summer that will net him a one-way contract.
Jeffrey signing his tender alone takes the Penguins above the salary cap, so the Penguins have some salary to move by the start of the season to be in compliance with the salary cap.
The Penguins very weak in their bottom six after losing Matt Cooke in free agency, have their hands tied as they are not in position to move a forward on a one-way contract for the sole purpose of shedding salary.
At this point, moving Jussi Jokinen ($2.1 million) only makes sense if the Penguins have another top-9 forward coming the other way for a salary of less than what Jokinen counts against the cap or if the Penguins sign a more typical third line player for around $2 million per season or under and therefore could move Jokinen for draft picks or prospects.
Although it would not have solved the Penguins salary cap issues, trading Jokinen is something the Penguins intended to explore if they were able to sign Dan Cleary who they offered around $2 million per season on a multi-year deal. Pittsburgh attempted to try to sell Cleary on coming to Pittsburgh for less money.
Now there are little to no realistic third line options still out there. One out there is Brenden Morrow, but leading up to free agency the Penguins showed no interest in signing Morrow and talking to the Morrow camp on Saturday, Morrow has had no expectations of returning to Pittsburgh based on the team showing little to no interest in resigning Morrow as of Saturday morning.
That said, the Penguins have no grit on the third line and Morrow would be worth suddenly checking into. He wants at least a two year deal and has been said to be looking for around $3 million per season, which would be too high for the Penguins.
Though this is very unlikely to happen, Morrow at let’s say 2 years – $4.25 million (AAV $2.125 million) would be a better fit for the Penguins than having an out place player like Jussi Jokinen playing a third line role or playing the wing when his best position is center.
The Penguins should try to sell Morrow on chasing a Stanley Cup for the next couple seasons and having a regular role on the third line. It would be a worth a shot. Signing Morrow for just north of $2 million per season and trading Jussi Jokinen for a prospect or draft pick wouldn’t solve the Penguins cap issues but it would make the Penguins a more complete team.
Based off the current roster, the Penguins are likely to go into the season with a top-2 lines consisting of Chris Kunitz – Sidney Crosby – Pascal Dupuis on line one and Jussi Jokinen – Evgeni Malkin – James Neal on the second line.
The team would love for Bennett to become an impact left winger on Malkin’s line but because of Jokinen needing to play with skilled players to be successful, I’m hearing the Penguins feel Bennett would be a better fit on the third line with Brandon Sutter than Jokinen.
That said, whether it’s Bennett or Jokinen as the third line right or left winger, the Penguins are looking at having a very “soft” third line based on this current roster.