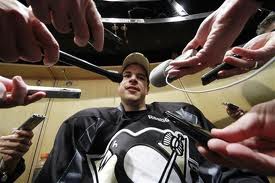 CROSBY LATEST
If the Pittsburgh Penguins are to set the NHL’s longest winning streak in NHL history this week, they will have to do it without Sidney Crosby who is going to be out a while.
After taking a puck in the mouth, the Penguins captain underwent oral/jaw surgery on Saturday and spent all of Saturday in the hospital and as of this morning had yet to be released. The surgery went well but Crosby will be sidelined for at least a few weeks, possibly longer, a source tells Inside Pittsburgh Sports.
The individual speaking on the condition of anonymity said a statement from Crosby’s camp and the Penguins will be made when an official determination is made on Crosby’s timetable. That should come today, the source said.  The injury is not expected to end his season but he won’t be playing anytime soon.
The injury, though, could put his scoring title in jeopardy. Crosby leads the NHL in scoring with 56 points and holds a 10 point lead over Steven Stamkos. If Crosby misses the rest of the regular season, Stamkos figures to surpass him with 14 games remaining. Winger Chris Kunitz is third in the NHL with 44 points.
The Penguins have just 12 games remaining. The playoffs start May 1.