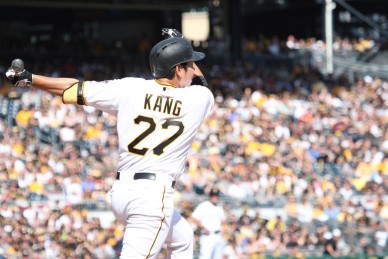 Rumblings, Musings, Opinions
1. Neal Huntington in January on the Pirates winning the posting fee for Jung Ho Kang and eventually signing the 28 year old Infielder. “This is an unprecedented situation, so it’s difficult to truly project how he will perform,” Pirates general manager Neal Huntington said. “That is why we had multiple people watch him play multiple times. We feel good about bringing him into our organization and we feel that this is going to be a very good investment for our organization.”
A very good investment indeed. It remains a very small sampling so far but Kang is showing enough signs that he is an impact player and his quickly ability to adjust to MLB velocity has been a great telling point. Whether Kang becomes an All-Star type player remains to be seen but the Pirates investment in Kang is pretty much pennies by baseball standards for what type of production they’re already getting and likely to receive moving forward.
The Pirates total investment in Kang | $5,002,015 posting fee, $2.5 million in 2015, $2.5 million in 2016, $2.75 million in 2017, $3 million in 2018, $5.5 million club option in 2019 ($250,000 buyout)
2. Jordy Mercer’s regression at the plate has been a major disappointment (.455 OPS this season) after hitting .285/.336/.435 in 2013, and .262/.328/.425 after the 2014 All-Star break. Mercer had a WAR of 2.0 in 2013, 2.8 in 2014. This season -0.7.
The Pirates have lucked out with Kang’s early emergence to have an adequate replacement in-house but Mercer can still have value to this ball club with his ability defensively. Not to mention he’s extremely cheap, making just $538,000 this season.
A good player to still have around.
3. Pedro Alvarez batting .357 since May 15, now has a batting line of .247/.325/.479, an OPS of .805. Alvarez has never finished a season with an OPS above .790. Are the signs of Alvarez being a better hitter in stretches this season just a lucky small sampling that is unlikely to be sustained or is he finally starting to figure it out? Taking a wait and see approach is probably the best route. Way Alvarez is, he could be hitting .210 again by June 15.
One of the biggest improvements for Alvarez is he has showed a better batters eye and more plate discipline which has him chasing less balls. That’s been a positive and at age 28, it’s about time he’s making some adjustments but having the 10th best OPS out of 12 NL first basemen who have appeared in at least 40 games, still isn’t good enough for a player picked second overall and suppose to be in the prime of his career.
As Alvarez’s time in a Pirates uniform is nearing an end as most anticipate he won’t be back next season, one way or another, he still hasn’t been able to put it all together where he’s come close to matching expectations.

4. Jim Rutherford came out and admitted this week that in the wake of the Penguins not asking for compensation in Ray Shero being hired by the Devils but demanding compensation for Dan Bylsma, the team didn’t properly understand the rule at the time Shero was hired that you could receive compensation for a fired employee until the Bruins received compensation for Peter Chiarelli, yet, that doesn’t add up as Chiarelli was hired on April 24, Shero hired on May 4th.
It was out there immediately after the Oilers hired Chiarelli that the Bruins would receive compensation, the year they would receive it just wasn’t settled until weeks later.
“The rule is not as clear as it should be,” Rutherford told the Tribune-Review. “We felt that the intent of the rule was for employees that were still with the team, that were working with the team, not terminated employees. “Once Edmonton (gave Boston) a pick for (former Bruins GM) Peter Chiarelli — when he was a terminated employee — we decided to ask for picks for future employees.”
This was a rule that was actually passed last summer but not enforced until this spring. Pierre LeBrun reported on April 20 with a clear headline “Teams can seek draft picks for fired coaches, GM’s, executives”.
The Boston Herald reported on April 25th, day after Chiarelli was hired, the Bruins would be in line to receive a second round pick within the next three years.
Since the Penguins didn’t understand the rule, all it would have taken was a simple email to Bill Daly to get clarification. That’s what the media did.
I was on the Penguins side that you shouldn’t receive compensation for a fired employee but all they did was do a disservice to the organization by not taking advantage of the rule that grants them compensation which would have been a second round pick for Shero. It’s inexcusable they didn’t properly understand the rule. What’s worst they didn’t even make an attempt to get compensation for Shero because they didn’t know. The whole focus was getting Shero’s $1.5 million salary, much lower than first believed, off the books.

5. The Tampa Bay Lightning went into Madison Square Garden unphased in Game 7 and are off the Stanley Cup Final with a 2-0 shutout win. This is a scary good team that can win any type of game and their window is huge moving forward with such a young team. Great stat on Lightning, 20 of their 21 goals in the series came from players in their top-6.

We’re up to 20 of 21 #TBLightning goals scored by top-six forwards in the Eastern Conference final. The big boys brought it.

Skill still wins out in today’s NHL at the end of the day and we’re seeing that in the Western Conference too. Whether the Ducks or Blackhawks advance tonight, the NHL will be getting a great matchup of two teams (Lightning vs Blackhawks or Lightning vs Ducks) that possess excellent speed and skill, not to mention elite talent at the forefront.
— The Daily Five returns Monday —