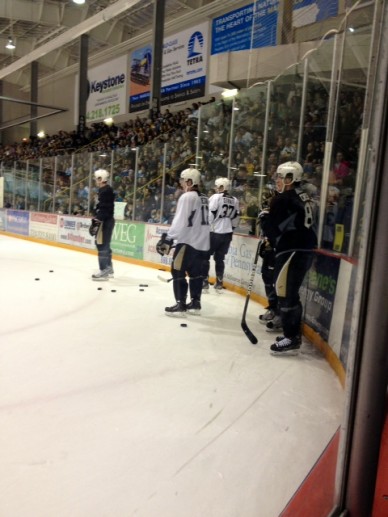 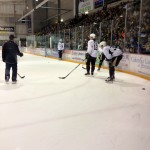 Day 1 Observations
Fast Pace Practice: Head coach Dan Bylsma put his team through a fast pace practice, especially in the first 40-45 minutes before the team went into some systems, working on forecheck and regroups. Overall Bylsma had a good mix of flow drills, line rushes, and some battle drills with 1-on-1’s, ect
Tangradi to get first look with Malkin: Eric Tangradi has opened up camp as the second line left winger and he will remain in that spot for at least one more on-ice session as head coach Dan Bylsma said afterwards that Tangradi will skate on a line with Evgeni Malkin and James Neal on Monday. With Malkin traveling back to Pittsburgh today, Dustin Jeffrey centered Tangradi and Neal on the second line. The coaching staff is intrigued at the prospect of a big, strong line in Tangradi – Malkin – Neal but there are doubts that Tangradi has the hands, creative ability to play with Malkin and Neal.
Despres impressive in 1-on-1 drills: I thought Simon Despres looked like the best defensemen on the ice today and he was very strong in 1-on-1 drills. Despres was excellent at squaring up on forwards, shutting down Sidney Crosby on one occasion and really used his stick well in defending 2-on-1’s.
Jeffrey has some hop in his step: Dustin Jeffrey fully healthy for the first time in over a year and he looks like a much improved skater from a year ago. Shero specifically named him as a player who it was beneficial for him to play overseas, even though it was a down league. When Malkin returns tomorrow, Jeffrey figures to be bumped down to the 5th line with Megna and Bennett but I get the sense he’s going to get more of an opportunity this season than he did last.
Strait the odd-man out: The depth chart on defense went about, as expected, and Brian Strait was the odd-man out. In fact, I didn’t even notice once shift that Strait took a line rush on defense. He skated extensively at left wing on the 5th line. We’ll see how the week progresses but right now is the No. 9 defenseman. 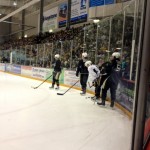 CAMP TIDBITS
— There was a strong sense around the rink that the Penguins are very likely to start the year with 13 forwards and 8 defensemen. At least that appears to be the direction GM Ray Shero is leaning but things can change as trade talks will slowly pick up as the waiver wire gets closer. No trades are said to be imminent on the Penguins front. Teams have to finalize their 23-man rosters by 3:00 p.m. on Friday.
— The line combinations of Cooke – Sutter – Kennedy and  Glass – Vitale – Adams is what I think Bylsma would love to go with on the third and fourth lines during the season, but it remains to be seen if he can. It all depends on if a Eric Tangradi, Dustin Jeffrey or Beau Bennett can step up into the 2nd line LW spot this season and the team doesn’t have to elevate Matt Cooke or Tyler Kennedy. Come the trade deadline, I believe Shero will be actively seeking a top-6 winger, which is a normal occurrence.
— Robert Bortuzzo did not look good during 1-on-1 drills and got beat twice by James Neal. He has to be better as the week progresses.
— To me the biggest difference for Beau Bennett from now to last year when he was at Denver is his strength. He’s not a player you can easily push off the puck like he was during his college years and he used his size very well during one instance in the 1-on-1 drills when he shielded the puck with his body to beat Kris Letang wide to the net for a prime scoring chance.
— Jayson Megna showed a lot of poise with the puck in the offensive zone and he’s a confident player. I got a small glimpse at why the Penguins are excited about him.
Notes: The Penguins will skate tomorrow at 12:00 p.m. with camp moving to Consol…..The team plans to bring up players from Wilkes Barre for the Black and Gold Scrimmage on Wednesday.