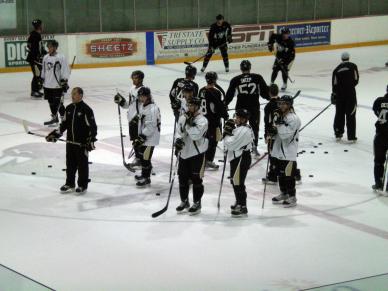 The players went through about 30 minutes of practice drills before Saturday’s drills.
One intriguing drill was a 1-on-1 drill where a defenseman would go up against three forwards in the course of one sequence.
Drill Description: One forward would start in the right face-off circle with the puck and go 1-on-1 against a defender. Once the play was broken up or a goal was scored, a forward in the left face-off circle would go against the same defender.
Once the play was broken up or a goal was scored, the defenseman would skate up to the closest blueline, pivot and a forward placed at the red line would go in 1-on-1 against the defender.
1-on-1 Notes
*2009 1st round pick Simon Despres was exceptional in this drill
– good positioning, took the body well.
– Bumped Kevin Veilleux (6-5, 200lbs) off the puck in one situation.
– Uses his long reach very well
As some of testing results showed, Despres skating is much better then he gets credit for.
*Eric Tangradi (6-4, 221lbs) protects the puck very well, uses his size well. Proto-typical Top-6 power forward.
*Casey Pierro-Zabotel is among the most gifted prospects offensively in the Penguins system. For him to succeed in the American Hockey League and make the jump to the NHL, he must get stronger.
Clearly lacks strength in 1-on-1 situations. Has been getting bumped off the puck all week.
*Alex Grant struggles against bigger, stronger players. He was beat twice by Nick Johnson (6-2, 197lbs) and Kevin Veilleux (6-5, 200lbs) on one occassion
Near the end of the week Grant did begin to show signs of his offensive potential.
Defensively he has a ways to go in his develop.
Struggles with his first couple strides (choppy) when pivoting backwards, and improving his lower body strength will help him in that area.
*Carl Sneep takes the body very well
Is starting to play more physical, which has been a knock on him from talent evaluators I’ve talked too in the past.