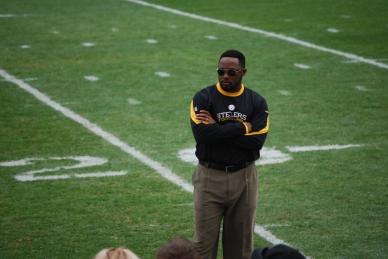 After a flurry of signings in the past week, the Pittsburgh Steelers focus is now turning towards the draft and the team is conducting a meeting today with one of the top inside linebackers in the draft.
Members of the Pittsburgh Steelers coaching staff including head coach Mike Tomlin and linebackers coach Keith Butler are meeting with Florida Gators linebacker Brandon Spikes in Gainesville, Florida, according to a league source.
Spikes (6ft3, 258 lbs) is one of the top inside linebackers in the draft and despite the addition of Larry Foote, linebacker remains a priority for the Steelers.
Tomlin and his staff are expected to spend two days in Gainesville, scouting and meeting with prospects.
In four years at Florida, Spikes recorded 285 tackles, including a dominate sophomore season in 2007, recording 131 tackles.
Controversy surrounded Spikes in his senior season after an eye gauging incident in mid-season.
Most scouts feel Spikes value has slipped to the second round and it’s believed the Steelers have Rolondo McClain and Sean Weatherspoon ahead of Spikes on their draft board.